The dogs were barking for a little while so I didn’t get to sleep as fast as I could. That was ok since my book was keeping me company. Eventually I drifted off. I don’t remember what time I woke up but there wasn’t enough sun to so I refused to get out, leading to a trip back to dreamland. Robert knocked on the door around 8a for breakfast. Now it was four of us, me, robert, george, and laura. Spinach and onion omelettes, granola and yogurt, juice, water, and quinoa cereal. Serious. There was quinoa cereal It was good and robert thinks it’s only found here so far since it’s a new product. I’m sure it’ll take off once it’s known. There was cane juice and honey in it. We made a plan with robert for the activities today. Again, it was not planned so that’s a $150.

After breakfast laura and I with Karla took a walk on a local trail, the Ruta Ecologica El Chaquinan. The part we were on was actually an old railroad path that was converted about 4-5 years ago into a trail. You can still see railroad tracks in the ground. It’s quite extensive but we only walked just over 2 km from one entrance, down to the river, and then back. I’m not sure if the whole trail was for the train but if we had kept going there was a tunnel you could see that goes into the mountain that you can also walk through. 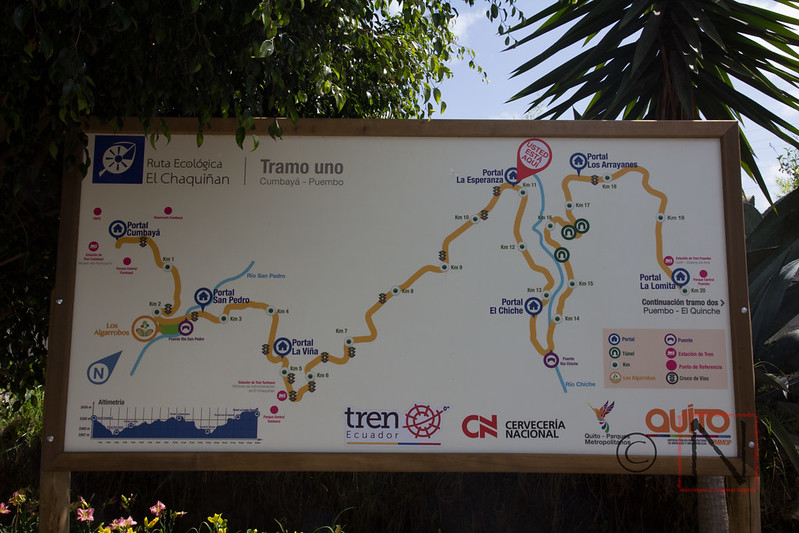 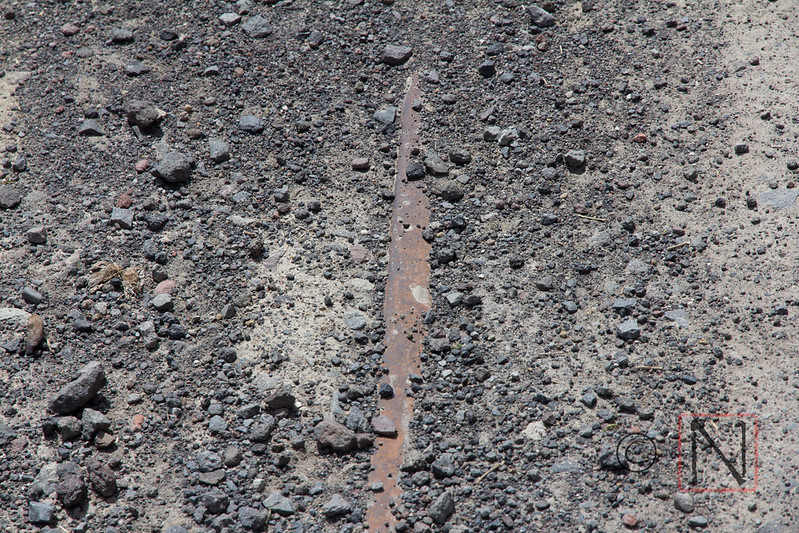 There were mountain bikers around who were annoying. I’m used to people announcing themselves or letting you know what side they are coming on. Nothing except the sound of the tires on the gravel and enough time for me to yell out that the bike was on its way. 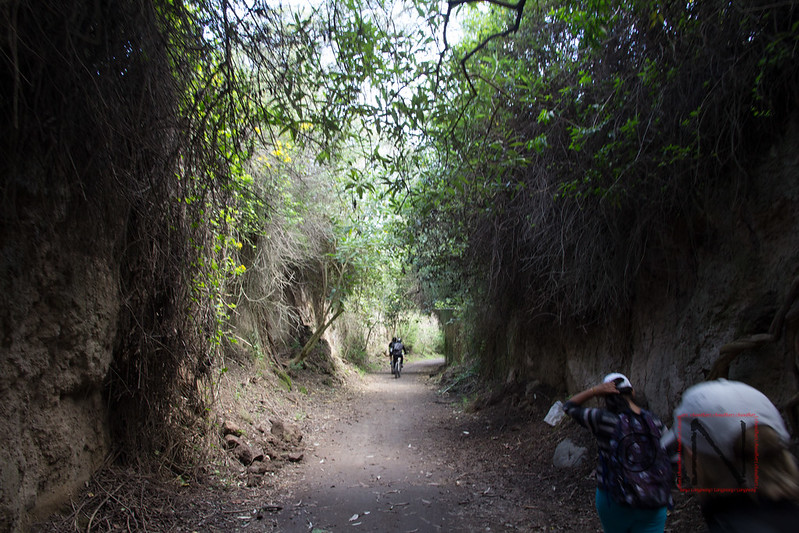 It was supposed to be a mini grand canyon and in a way it was. I was thinking more about sheer cliffs with a river. This was a green wooded gorge with a good sized stream. It wasn’t babbling, it was already able to talk. 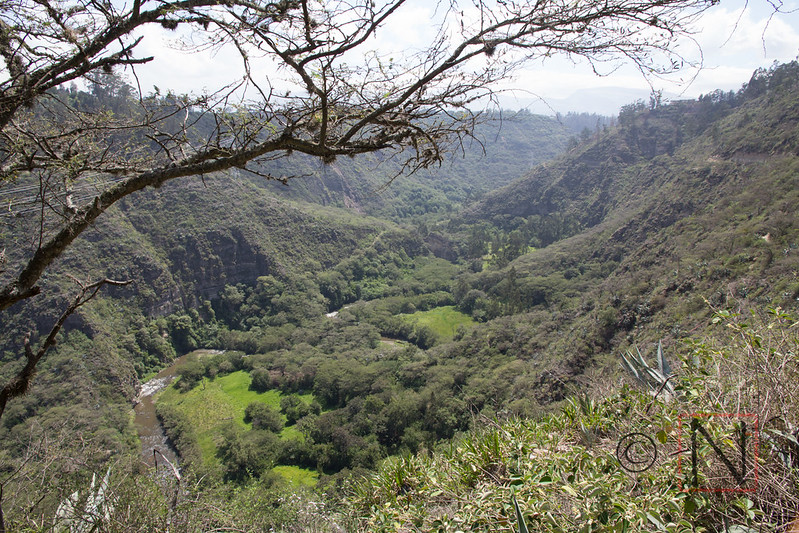 There were some local cows at the bottom to greet us in their nonchalant way of ignoring us. 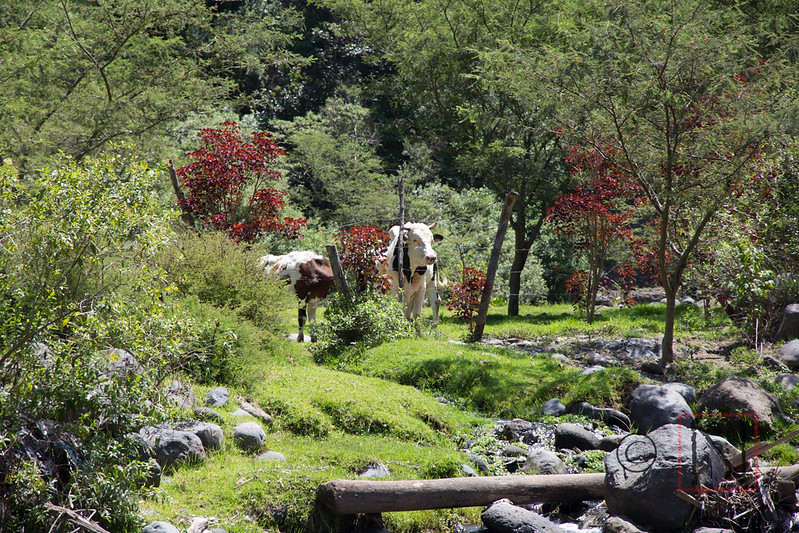 There were pretty flowers and plants on the way down along with a large wood pile that I presume was from a fallen tree that they had to cut up. After we got down it was time to turn around and head back up and return for a snack at the inn. 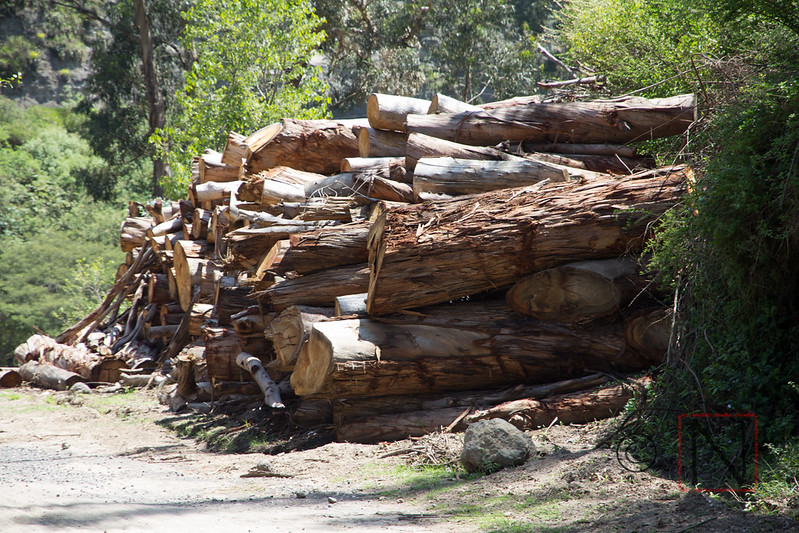 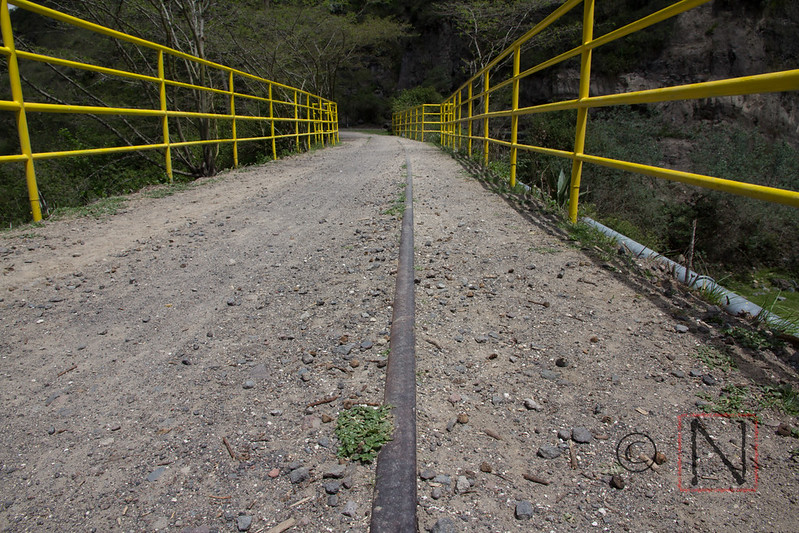 We had some great fresh fruit of papaya, apples and watermelon. This was some of the best fresh papaya ever. Then it was time to pack up and head back up with Luchas, the cab driver from the day before, and head for another hour to a hot springs area up in the mountains. No directions needed this time. Again about 14,000 ft I was told but something I want to try and remember to look up. This place is called Termas Papallacta. 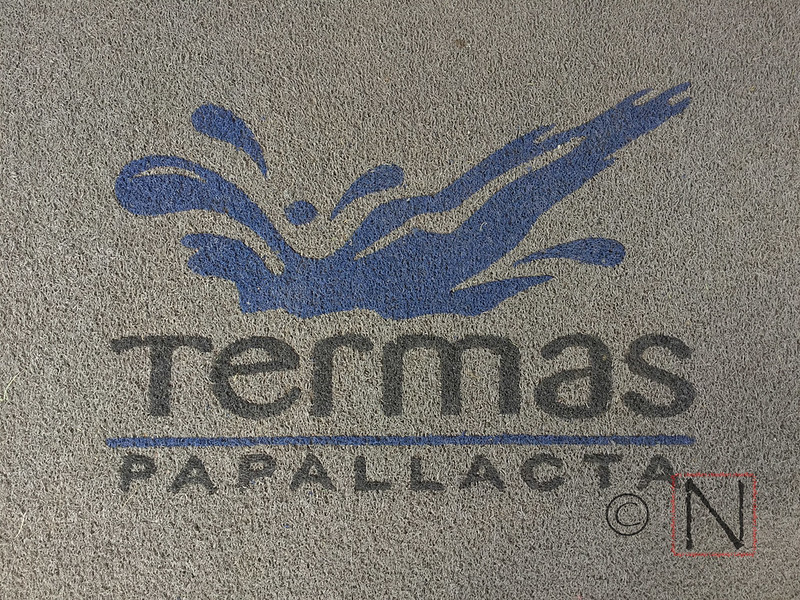 The water comes from the mountain and I don’t know if the water is heated because of the volcano or they do it there. There are definitely some super hot pools that I could barely step into before I could feel myself burning. Conversely, the cold pool to shock your system was wonderfully cold. You dunk and get back into the warmer pool if you can’t stay in there longer. I tried standing for a short bit but I could feel, or actually, couldn’t feel after about a minute. I wish I had this pool when my shin splints act up.

You have these baskets that you can put your things in and carry around with you as you go from pool to pool until you settle down at one. I think one of them must have been sharp as I found a few cuts on my hands that were razor thin and not jagged at all.

The waters are supposed to have healing properties and are used by patients for all sorts of ailments including respiratory, joint, sleep, muscle and digestive. 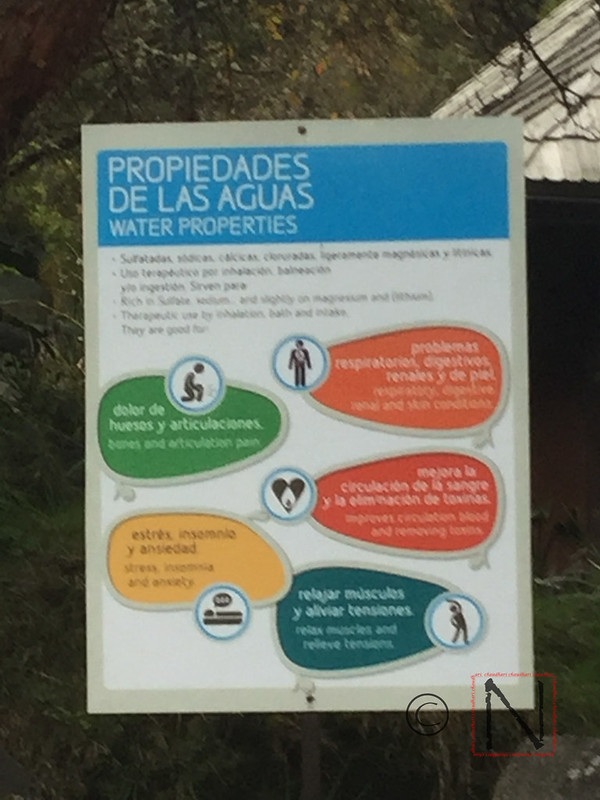 Laura and I tried a few different ones with some cold shocks in between and settled on one that was hot tub temperature. 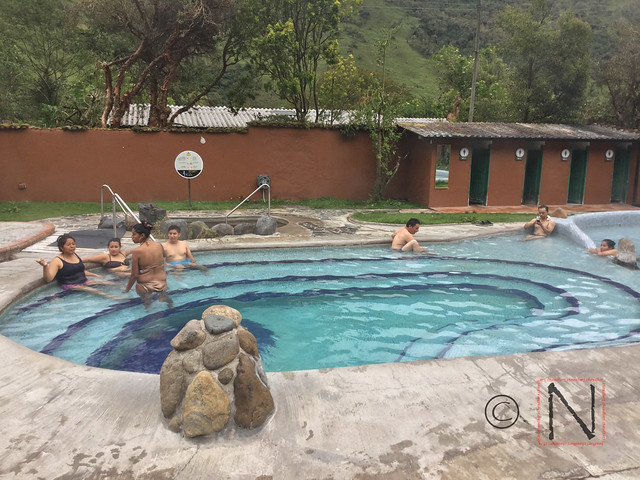 The only gross thing was that some people seem to have rubbed themselves down and I’d swear those were skin particles floating in the water, otherwise something was growing. It was still really nice to be in. We indulged in a little wifi access that we found at the spa that is there and did a little texting and work before we headed back to meet up with some of the new people that arrived.

The drive up had been eventful in that the road was closed at one point for construction. Like completely not moving. A police car showed up at some point and soon after the road opened up again. Not sure what was going on there. The trip back to the inn was fraught with a lot more cloud movement. It had been raining off and on throughout the day anyway but now it was just difficult to see the road until we got far enough down.

Back at the inn we listened to Mary and Joanna (?sp) talk about their recent trip into the Amazon to stay with some indigenous people. It wasn’t as ground level as I expected it to be. At nights they had a lodge to stay in with a flushing toilet, hot showers and chef prepared meals.  The did have to sleep with mosquito netting over their beds with the possibility and probability of waking up and seeing tarrantulas crawling on the netting. They did get to go with their local guides through some bushwhacking and see different types of monkeys, parrots, toucans, tiny alligators (at night from the boat and with a light), and probably more. Joanna was adventurous and had a decent sized cooked grub. Mentally, mainly because of the squishy middle she described, I’m not sure I’d be up for it.

From there we retired to the dining room. 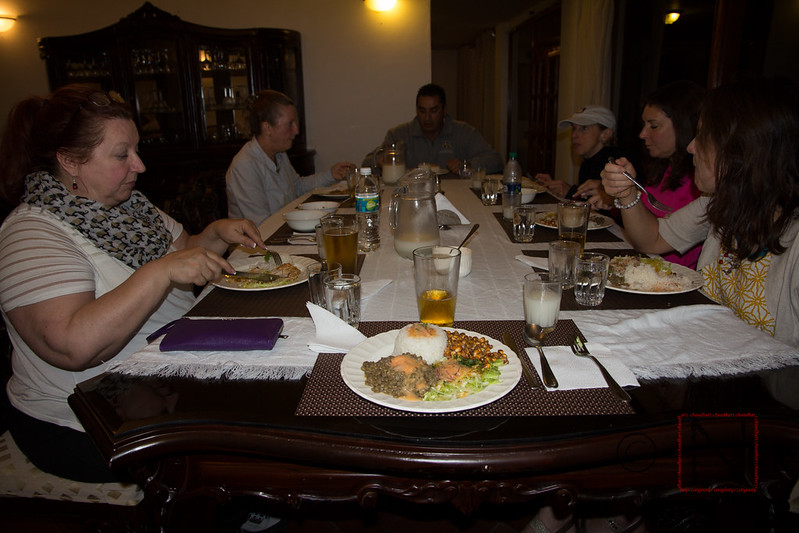 I had the veg choice of lentils, rice, salad and basically roasted corn pieces. A nice crunchy unpopped kernel I think. More juice and water along with a local pilsner. 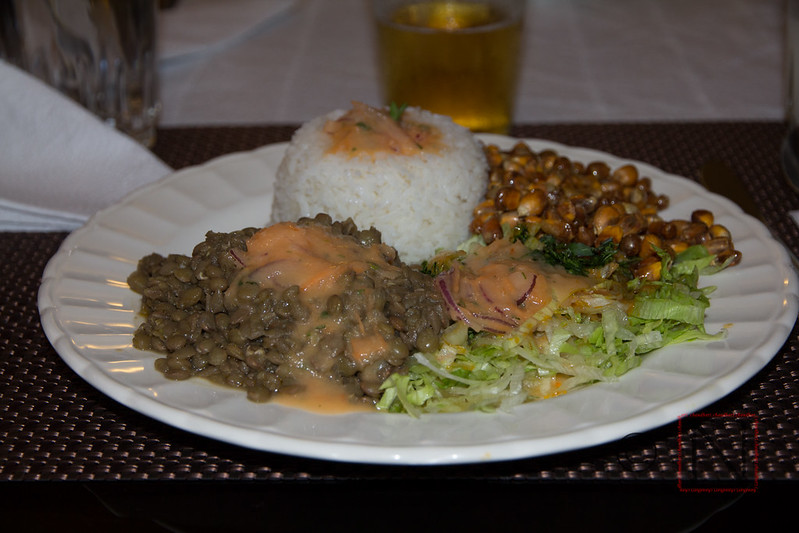 After dinner I had a massage on the property. Painful at times but not so much that I couldn’t take it. When she got to my back she did her best. She knew that was the main focus but it was mostly at the end. She was starting to get into it when she said it was over. Drat. I came back and joined everyone else. Mary had already drifted away, I presume to sleep, and Tara had joined us.

We went over that breakfast again was at 8 and tomorrow was Quito day. Passport optional but encouraged to get stamped for the middle of the earth or world, or something like that. If it said Middle Earth, the Tolkien geek in me would have a geekgasm. The ladies went off for a walk with robert around the property but I’m back in the room so I can type today up before I forget and to download the pictures from today. I’m now behind two days on the photo cleaning job. I’m going to stay up for a little while longer and go through some more photos but the bed is calling and a book doesn’t read itself, unless it’s digital at least.