Another fine wakening. I took an early stroll for some morning pictures. 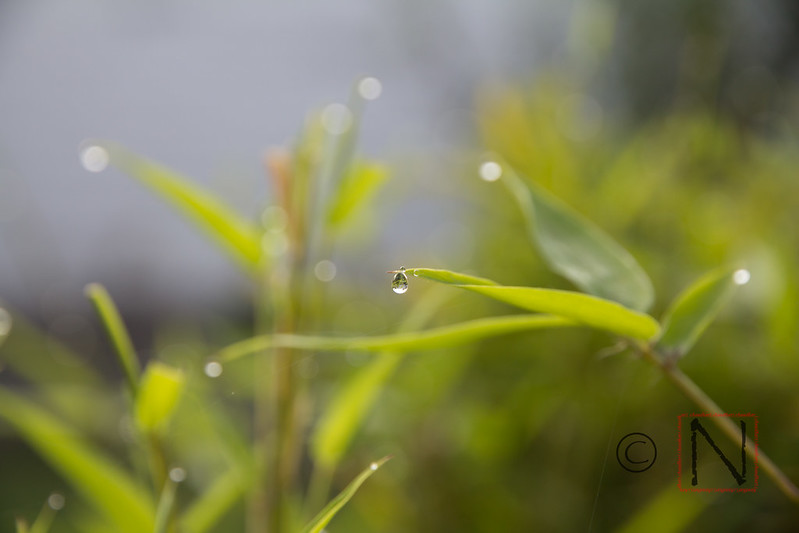 We also had another great breakfast. Patricia and Karla continue to do wonders in the kitchen. I think everyone wants to take them both home. Today we are headed to Quito.

I’ve gotten over my shyness of taking pictures of locals doing whatever they are doing. It’s parts of the story sharing and so more local pictures. 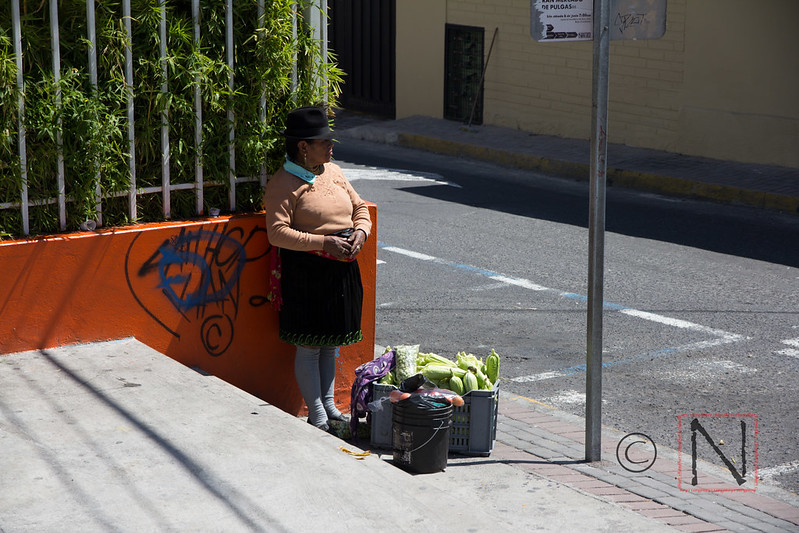 Along the way to the equator museum we stopped by the UN building. It’s beautiful architecturally. I remember seeing the picture of it somewhere before, as it is quite distinct, but I can’t remember where.

We also saw a monument for the middle of the equator but apparently the correct coordinates weren’t used and it actually isn’t at the right spot. Oopsy. 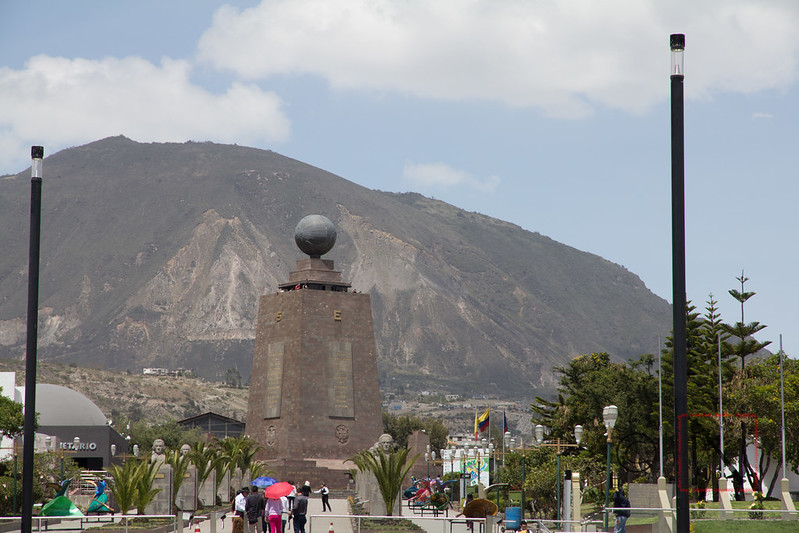 At the museum we saw depictions, pictures and preserved objects of natives, local flora and fauna, including a tarantula, anaconda, python, a parasite that enters through the urethra, and shrunken heads via paintings and actual shrunken heads. The heads were made to take power of an enemy and sometimes to preserve someone important like a chief’s daughter. While there the guide gave us some yummy small bananas. 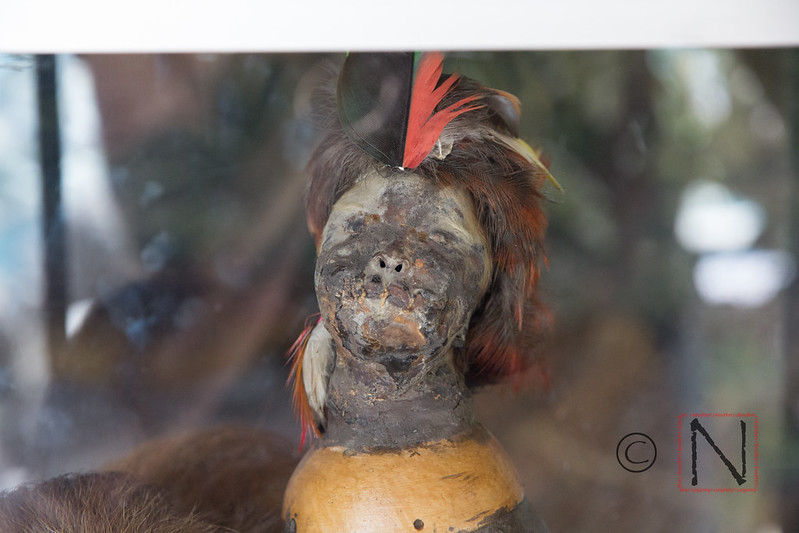 In another area I passed a solar oven that was boiling an egg. A lot of space used for a boiled egg, but it’s ‘free’ energy. A lid might have helped to speed up the cooking. Next up was a hut built by the indigenous people from the Wuaorani tribe. They placed items inside like a blowdart gun, spear, fishing nets, etc.

Next was a burial area that reminded me of something like the egyptians. They were buried with things they would use in the afterlife. Sound familiar? Pots and objects that marked this person’s station which I think was chief. In front of the burial area apparently was a hallucinogenic cactus. I didn’t try it to test out. We passed by some totems donated from around the world, including one from hawaii. Now for the real deal, the equator line.

She showed us next a globe with northern and southern hemispheres. This was a prelude to the corriolas effect. Right on the equator the opposing forces really did cancel each other out and water in a basin just went straight down. North of the line by just a few feet and it spun in one direction while a few feet in the southern direction it spun the other way. Fascinating how short a distance was needed for the forces to flipped. 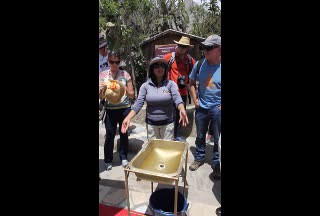 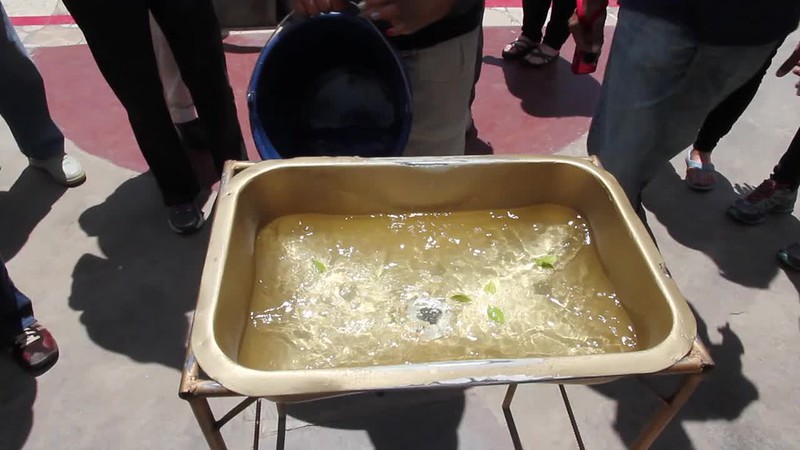 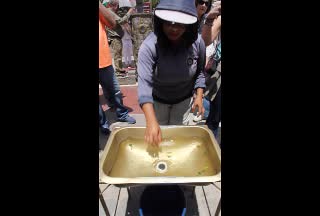 Another aspect of the neutral/opposing forces is that you can balance an egg on a nail. Yup. Nailed it! And a pic to prove it. There is also a line you can try and walk on with your eyes closed. It’s not easy with the forces opposing you as you try and step.

Guinea pigs are eaten in south america and there were some in the corner of a room. I don’t think these are to be eaten but that’s not up to me. They are cute though. 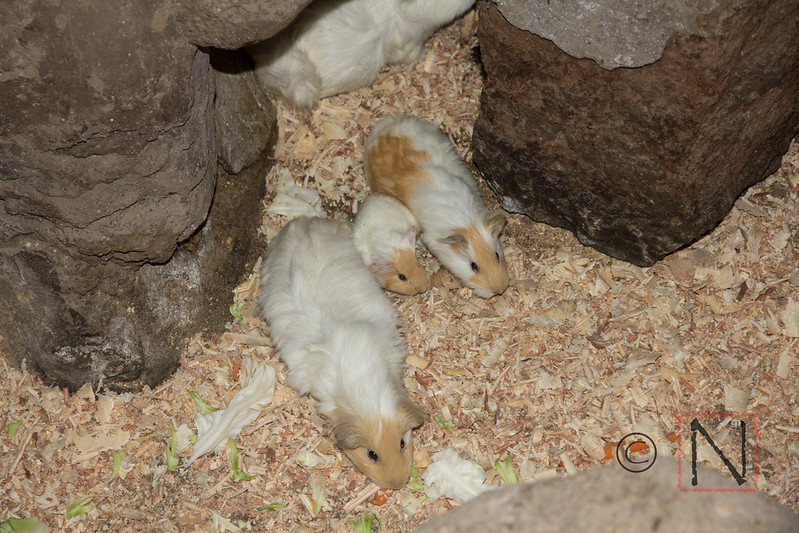 On the way out the guide showed us a crafts area. The man was using a loom to make things with. We were told that the men do the weaving and the women make the yarn. There was also a hat that was made from cotton and corn. Pretty stiff actually and she said it could be thrown like a frisbee. Right across from there was a beautiful bird eating some corn they have hanging down. Of course these crafted items were able to purchased after some gentle haggling.

Then another highlight of the trip. The coco museum. 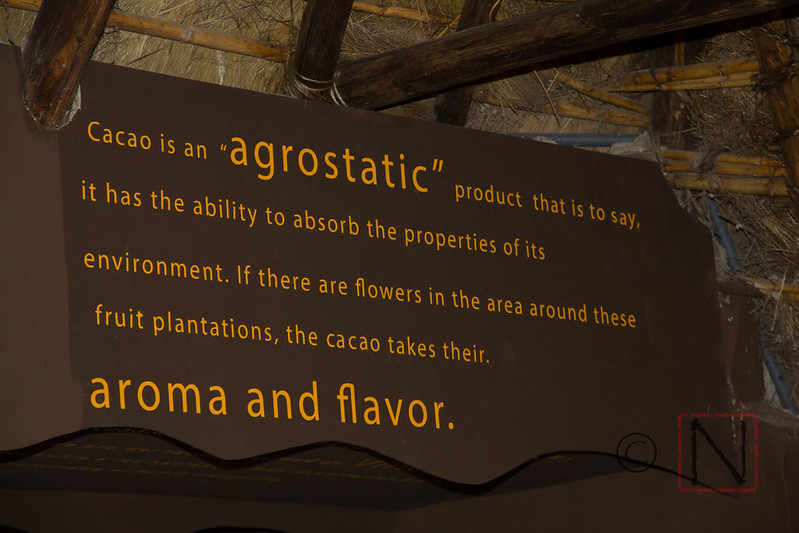 The mini tour talks about where it comes from in the amazon and how it was taken to other parts of the world. We were shown it it is processed. This ain’t the same sugar chocolate mess you find in the USA. This is real chocolate. Some of the ways it was used was in chocolate drinks. There is a place in santa fe, NM that makes this mesoamerican drink and it’s yummy. Equador/this coco museum is using Pacari to help brand and market this quality chocolate. They are kosher, organic, and fair trade. And the chocolate tastes great. As I was able to balance the egg I got a certificate as an egg master. I was also able to get a stamp in my passport that I was there at the equator. I’m not if that’s legal or not but apparently it’s done.

We stopped by a reserve for some photos, the bathroom and to buy souvenirs. It was a beautiful view.

Then to an art museum where Ortega paints. We were told he is in the guiness record for being the fastest painter without a brush. Same as other art, you either like it or you don’t. Sitting upstairs we had a yummy lunch of chocoa which are grains with the addition of onions and tomatos. 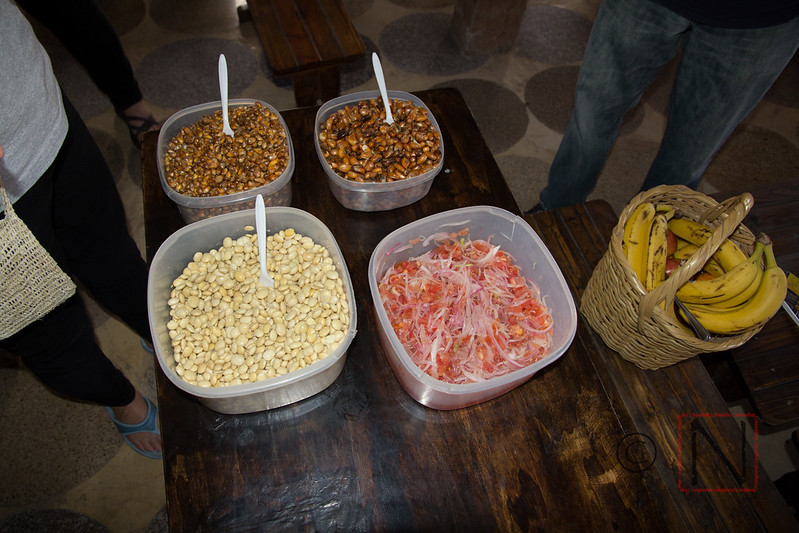 We added some bananas, apples, pomegranate like things, tamales, and humitas as other food items. After eating it was down to the temple for indigenous pieces and a solar window that only has light come straight down twice a year. The equator line runs through here and you can balance the egg as well. It got cracked one someone’s attempt but they still got it on sideways. Nice job! The guide then showed us the positive effects of jade and aromatherapy. He played something like a diggerydoo instrument and one that sounds like a bird. There were interesting native american type of items also hanging around like dream catchers. I didn’t inquire what those were about. Saw more Ortega works upstairs before heading out. 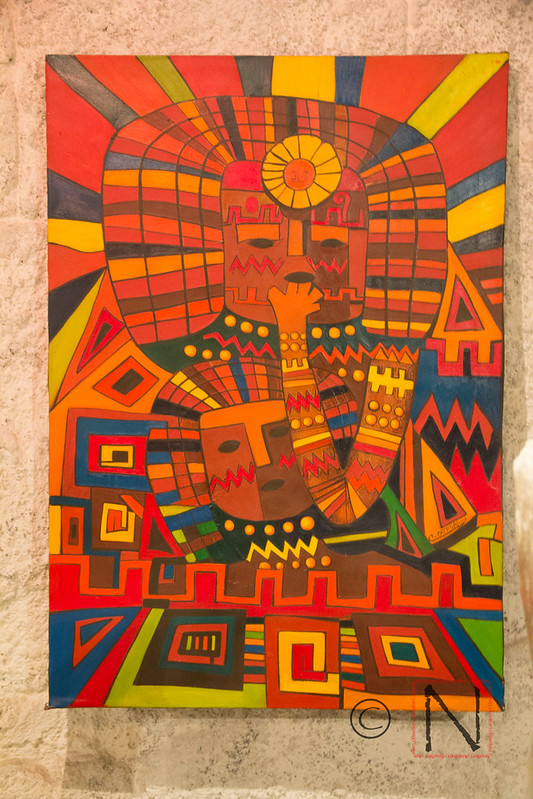 We were treated to some ice-cream. Here they make it using one larger tub with ice and salt (freezing point depression) and then a copper pot on top where the ice-cream itself is made by hand. 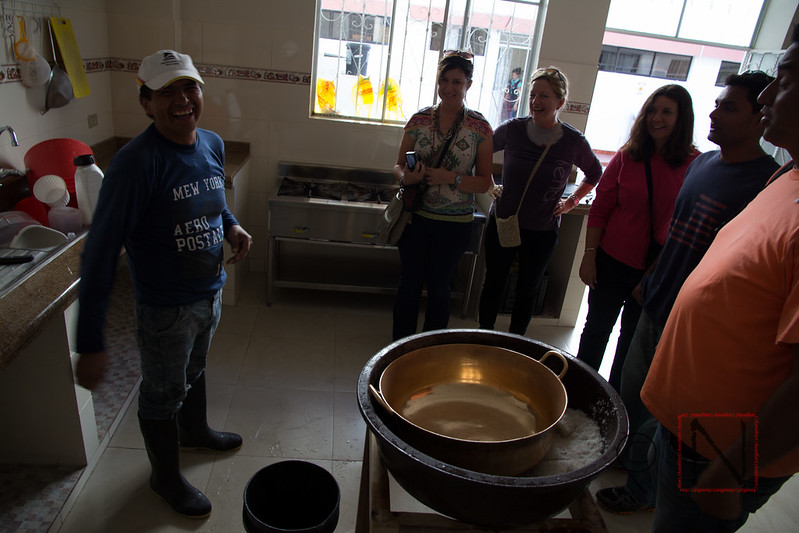 It tasted more like a sorbet but while none of the flavors were bad, some were definitely better than others. I gotta stop eating so much junk even if I’m on a trip. I’m doing a bunch of walking around but it’s not like I’m a thin guy.

We moved on to quito itself. The first stop was a famous hotel. For the group though, some people just needed it for the bathroom. Nothing else going on there for us. 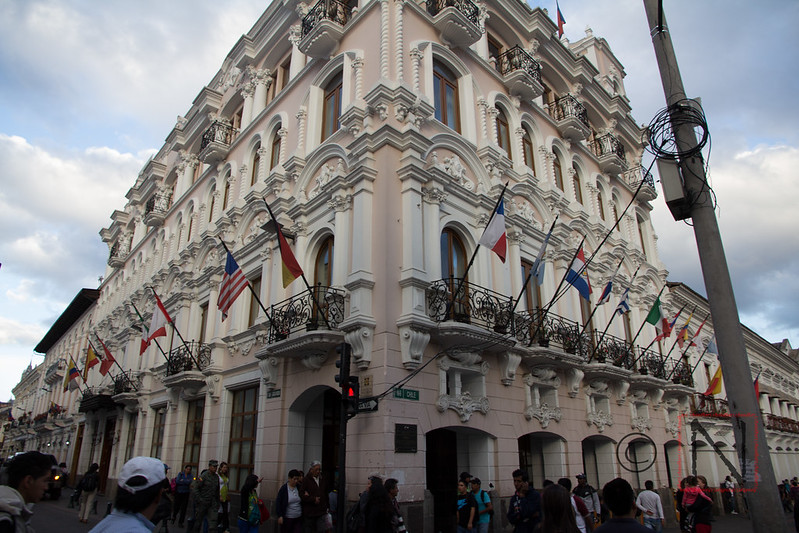 Walking around we passed by a guy selling coca leaves. Not coco but coca. Like cocaine coca. It’s a very very small amount in the leaf and can help with altitude sickness. You just brew it up in a tea or chew it straight. There was also something with coca and marijuana. That one was a pass by everyone. 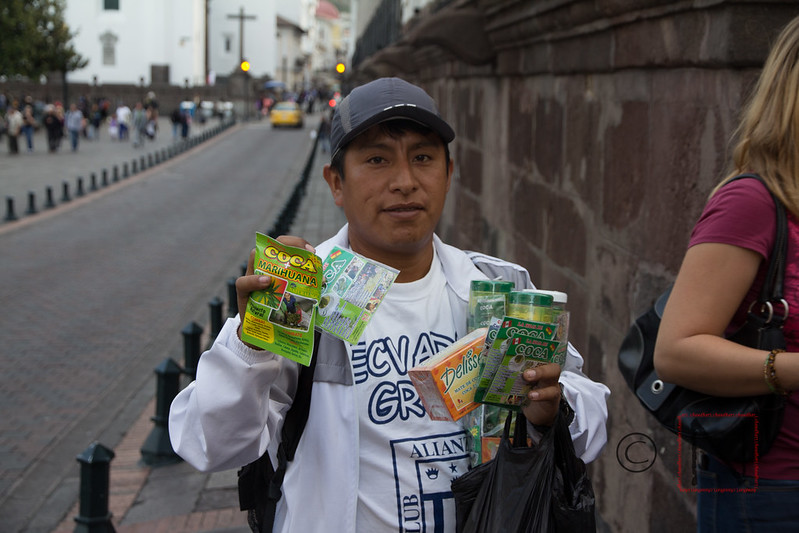 We walked on and entered a market area. There was someone selling these wafers in a disc shape that she but different spreads on and then sandwiched with another wafer. The chocolate was the best and I didn’t particularly care for a fruit one that tasted too sweet. 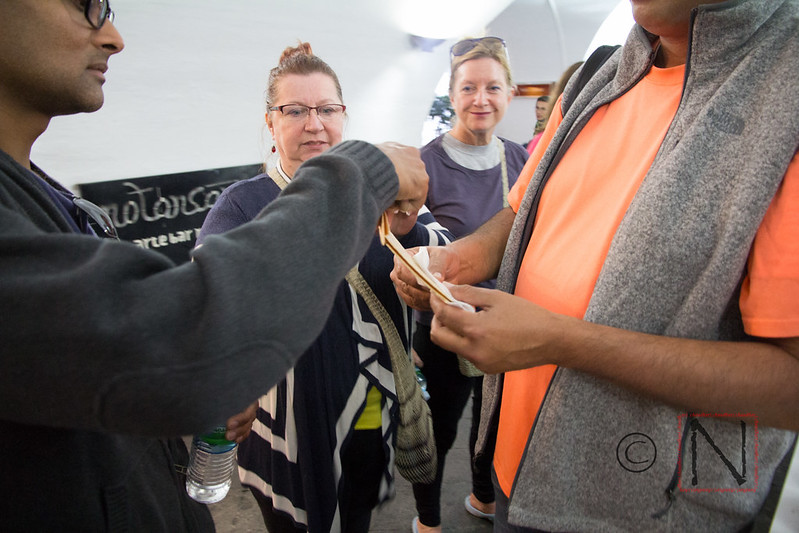 As we were leaving the market area we came across some protests. One about animal rights. 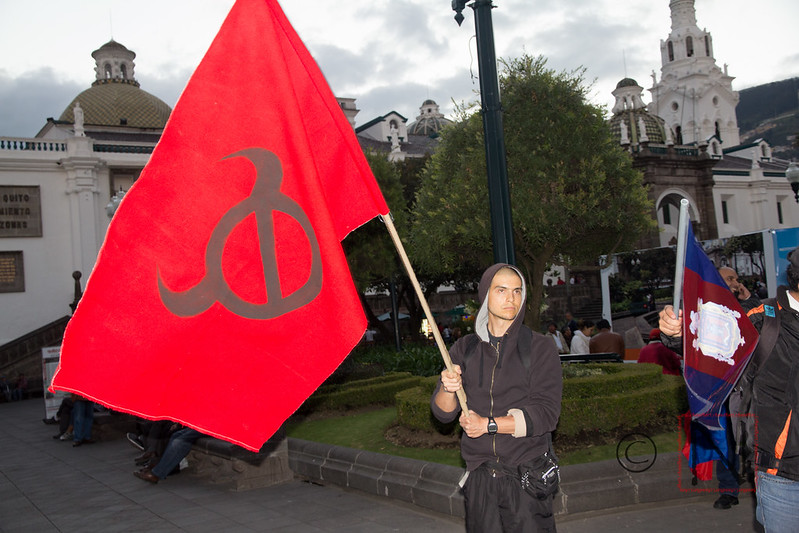 Another about the government and politics. We were told that it happens often and is done without problems. We moved onto a monument about the eviction of the spanish. Near that we saw popup street comedy. I didn’t understand any of it really. From there we were allowed to enter a church and were given a tour. 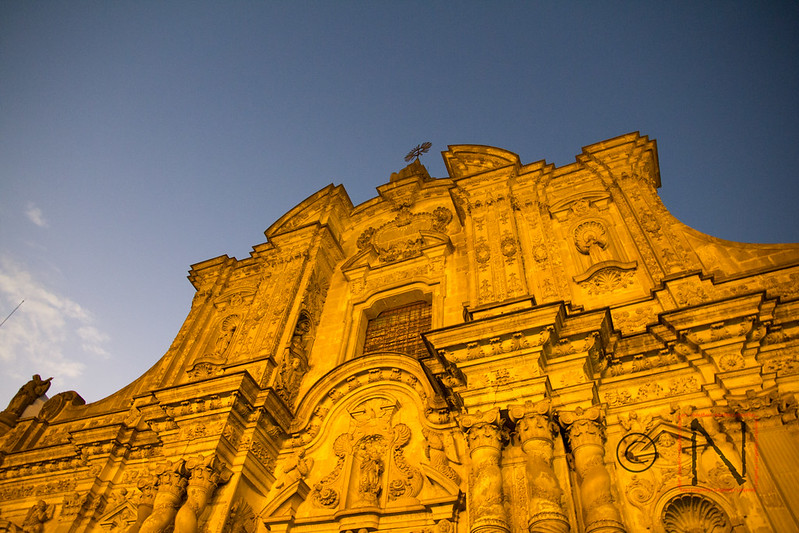 Most of it was very ornate. It was wood with gold foil. You’re not supposed to take any pictures for security purposes in case you or someone else wants to come back later and steal things. 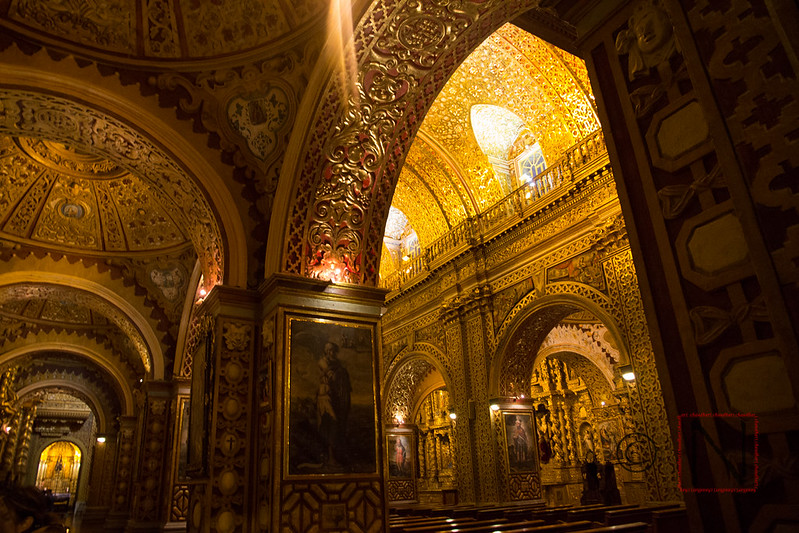 I think a real gang could just come in and find a way if they really wanted to. The new pope has been to this church. We ended with a mural about sins. Unfortunately some of the depictions didn’t make sense nor did the guide know what they all meant.

After that we headed back to the inn for dinner. Fish for some and veg for others. 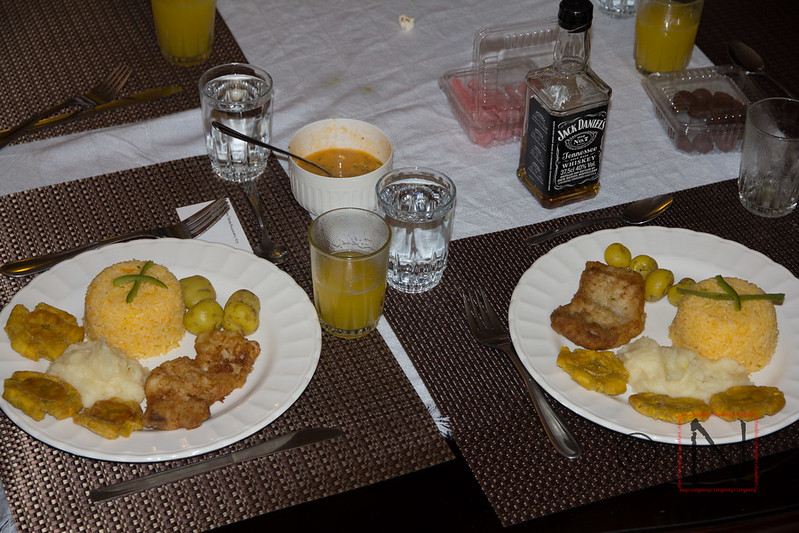 It’s nice now not to be the only one trying to eat vegetarian. Rice, plantains, and what we thought was mashed potatos turned out to be creamed white carrot that tasted starchy just like mashed potatoes. 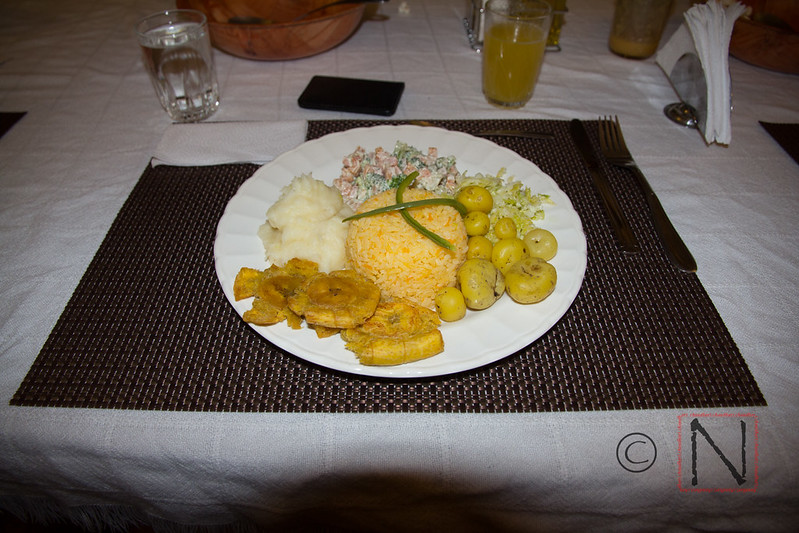 A great picante tonight that was tasty and just hot enough. The juice is always good and the jack daniels made it a little better.

Off to bed after dinner as this is our last night and we’ve got a very early flight.