It started with a very early rise at 430am to leave around 5am to get to the airport. Why? Galapagos bitches! 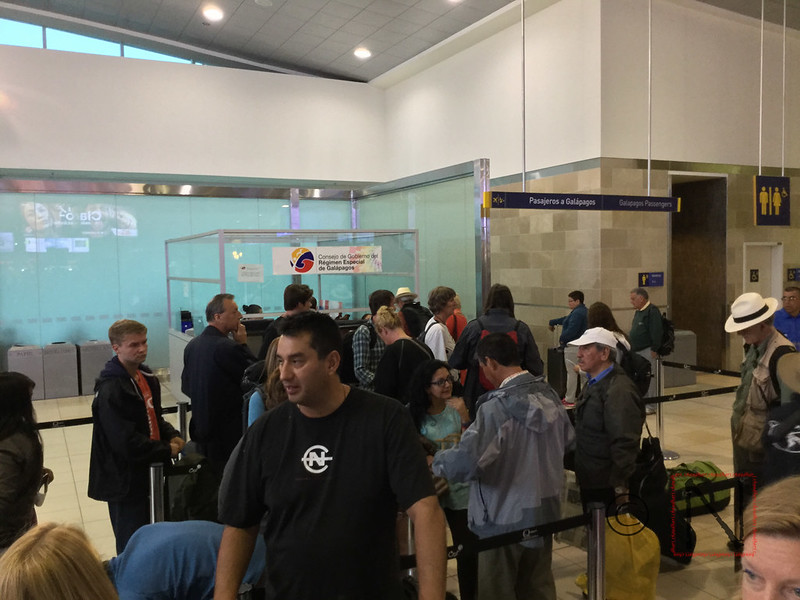 Seriously the place of legends and textbook chapters.

Basic group check in and boarding. Security thankfully wasn’t that long or difficult. As we got through the plane was already boarding. It wasn’t too full though which is ok. But I did get an aisle which was a total bummer. At first I thought it was Lan/Tam but it is the local ecuadorian airline Tame. No chance for upgrade I think and therefore no pictures for me to take from a window. Being vertically challenged in a standard seat is rough on the knees. The seats were loose and fall back some, crunching the space even more. Thankfully it was a short enough flight otherwise I would have tried to move.

After landing we took a very quick cab ride in trucks to the hotel and got into our rooms. 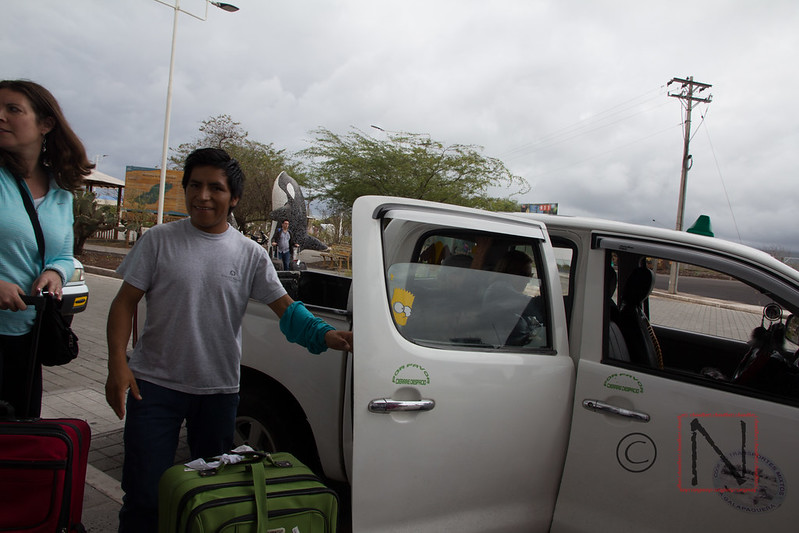 Nothing fancy but then nothing is or probably should be on the island. I’m ok that it doesn’t encourage even more tourism and people just have to deal with what’s here. There is an AC in the room which will eventually get it cooler. 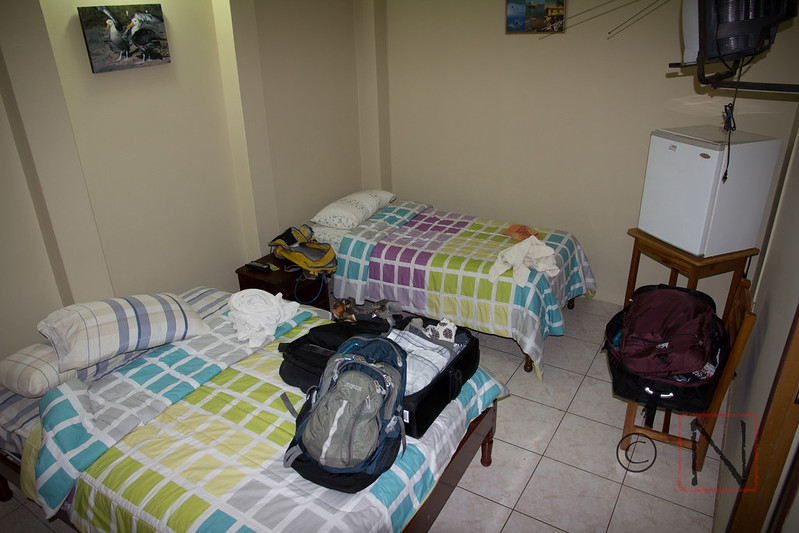 Had soup with popcorn instead of crackers and pasta salad. Turned down the jello desert. Looks overcast but I hope it will blow over or just be localized. 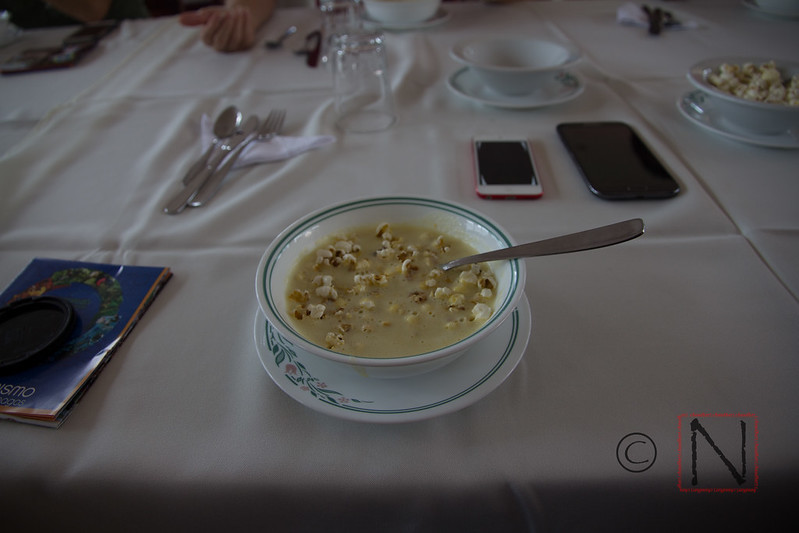 (Pause for going about)

We met at the front of the hotel with our guides and they took us for our tour. We went to the interpretation center where they talk about the islands history and how it is currently. 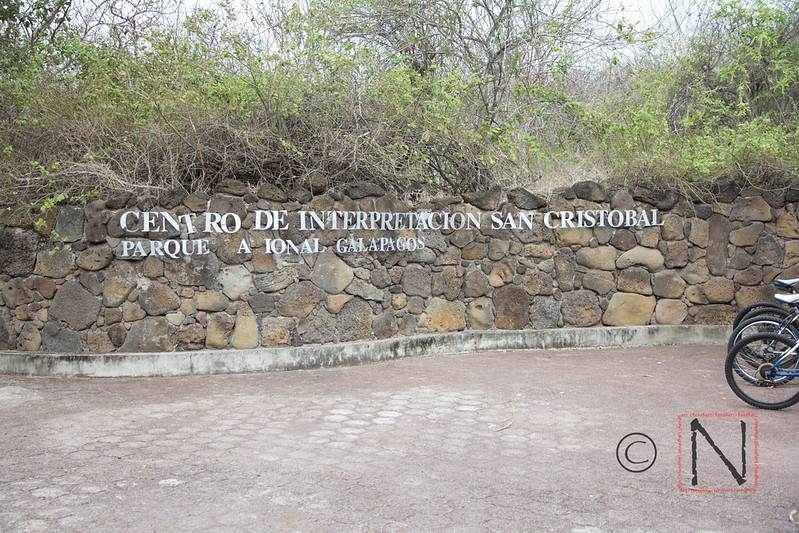 Only San Cristobal and Santa Cruz have fresh water. The others have to have it shipped in. Our tour was given by Wilson. 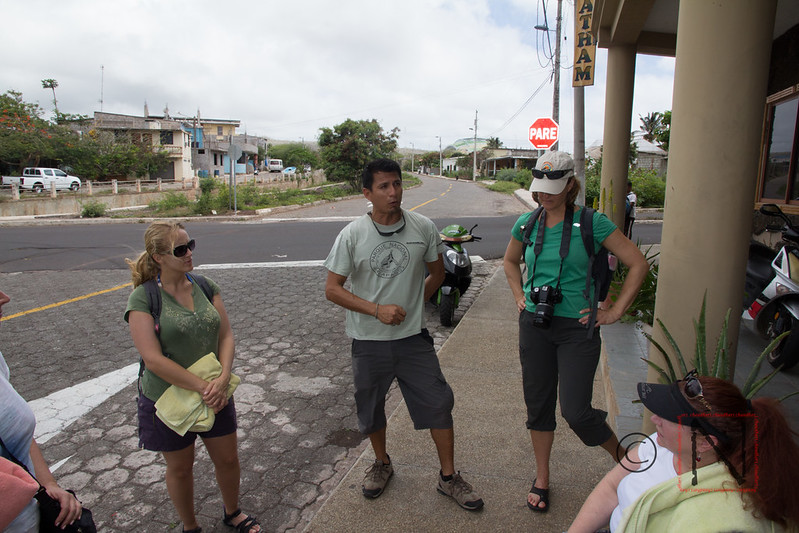 Another guide was there, Melanie, who is in her second week as a volunteer exchange from Switzerland. 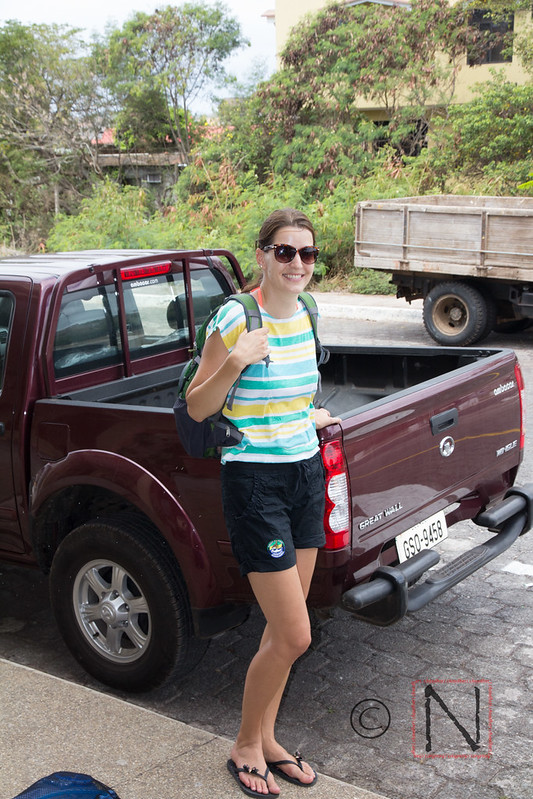 She is doing research for the year. She’s tracking what is eaten and where it comes from. That is, if a bottle with some identifier is used she is going to try and track down where it came from. It seems more trash comes from the locals than the tourists. For once we’re not making the bigger mess. Melanie and Wilson look cute together.

We walked and talked and went up to some lookout points for better views. We some some finches as well as endemic cotton. 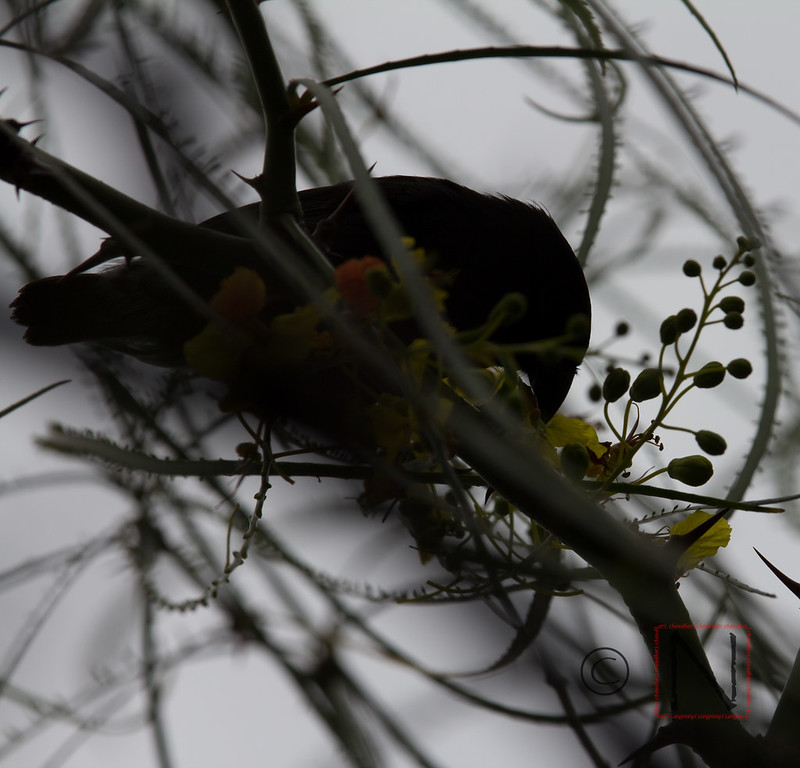 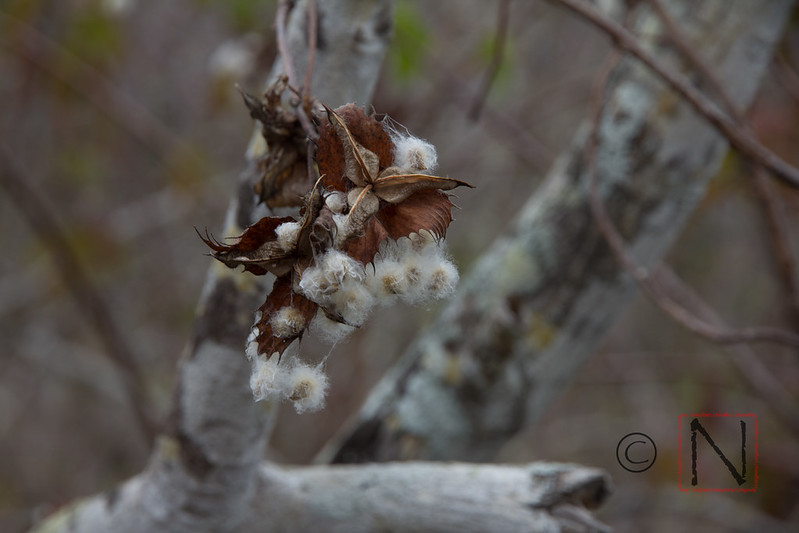 The frigate birds are huge and in the photos they look dangerous and something that I would see in a sci-fi novel. They are also called pirate birds because they steal from other birds. We did see one that had red in the front indicating it was the male in the group. He’s got his harem around him. 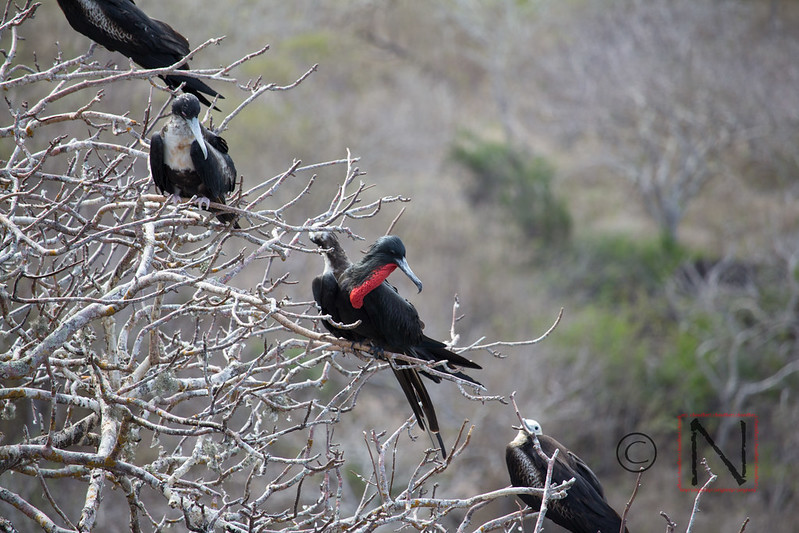 From there we went back down to an outcropping for some snorkeling. There were fish and sea lions. On the way back people were getting nipped by the sea lion, including myself. I got nipped twice. It never broke the skin but it sure wasn’t a pleasant love bite. 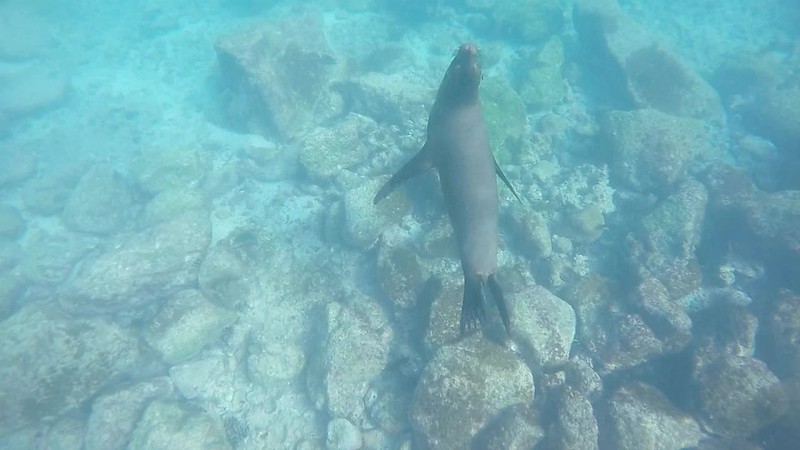 We moved on to our first breach. It was cool and while the water was murky, I saw the largest turtle I have ever seen. I tried going back for my go pro and getting a video but I couldn’t find it a second time. I did see another turtle but the video doesn’t show well. There were sea lions everywhere and a scattering of iguanas. 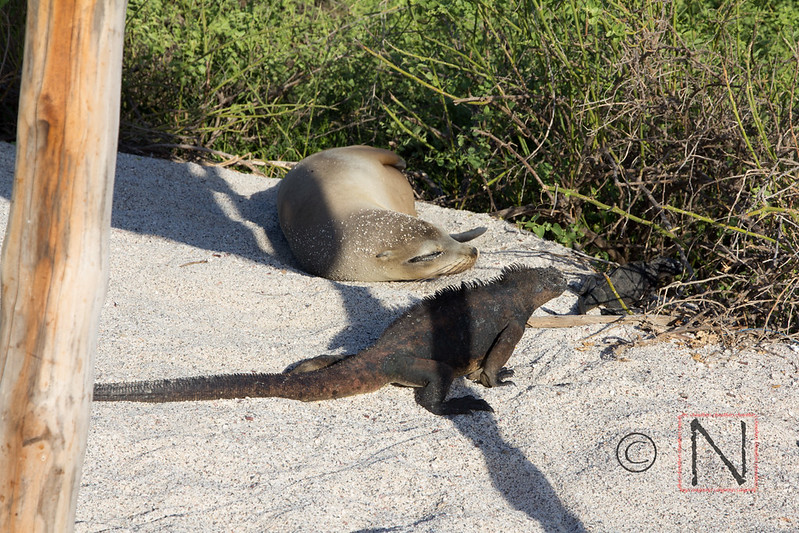 After a bit we moved onto a second beach. Still more sea lions. The additions were some baby seals and baby iguanas. We had roasted corn on the cob with or without cheese, not the usual butter, lemon, salt, pepper I’m used to. The corn also tasted different. The kernels were bigger than a ‘regular’ cob. The pilsner was a nice addition to the snack. 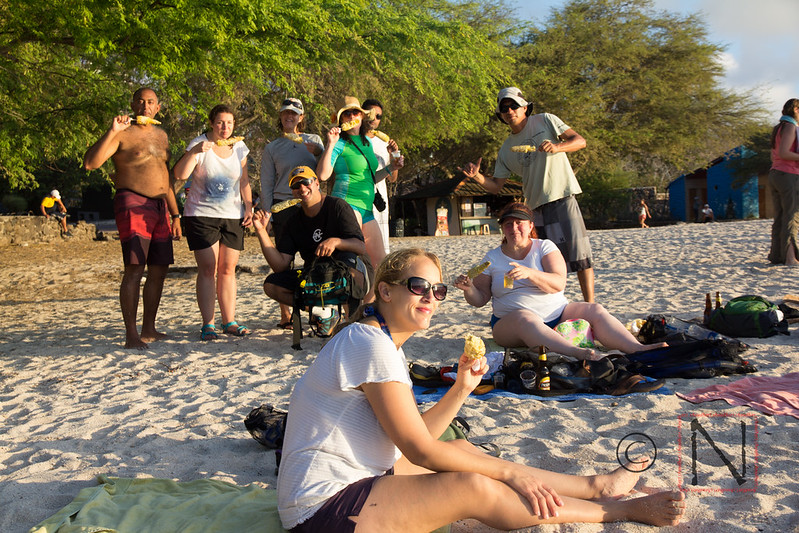 We walked back to hotel. It was a beautiful night. Enough time to head back and change for dinner.

We went out to dinner and I split a vegetarian pizza and vegetable crepe with Aashish. The pizza was large so others got to share in that as well. The octopus did not look appetizing at all. The pilsner is growing on me and the meal was better with it. After dinner we headed back to the hotel with a stop for sea lion watching. 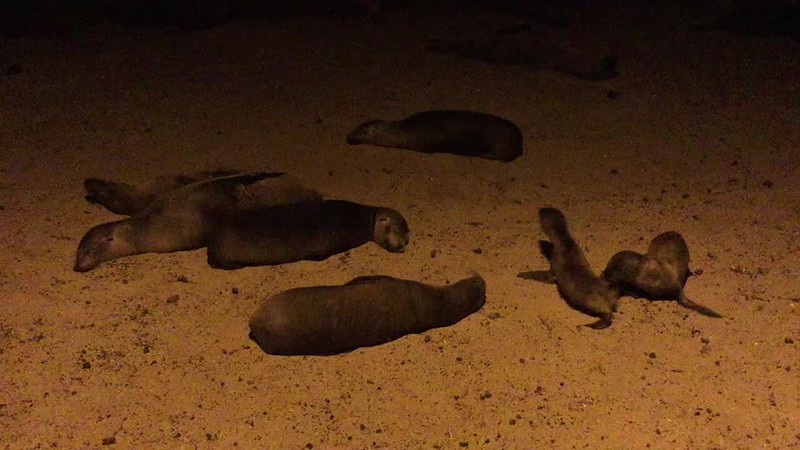 At a wharf I saw some small rays in the water too. There were about 6-8 of them and they were really small. A sea lion came around and you could see the rays scatter and then regroup. I’m not sure who has the edge for maneuvering in the water. Back to the hotel for sleep. 7am breakfast.