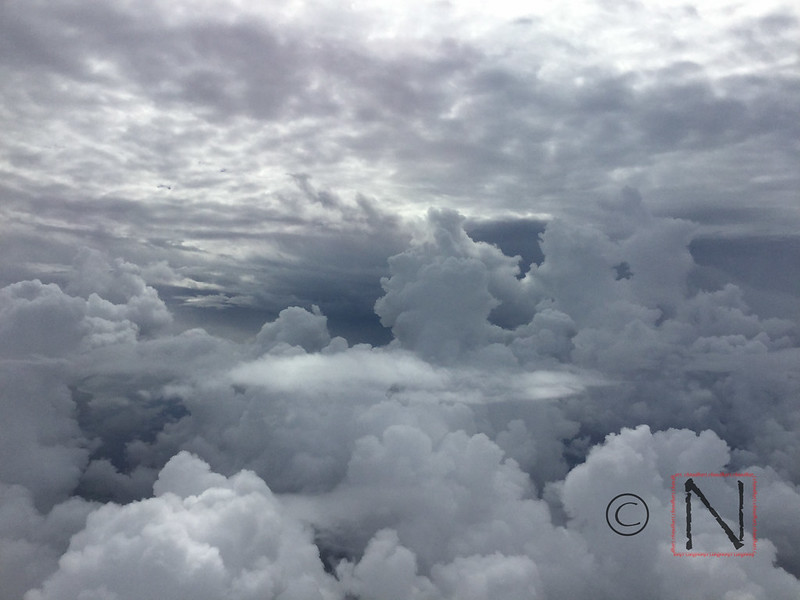 I’m not a morning person but I’m waiting for my body to learn that. I popped awake at 4:15am. Why?! Can I not just sleep in until the alarm? That probably shouldn’t have a question mark as it was probably rhetorical. Kristi and I were up and ready on time with George to take us to the airport. The traffic was heavier with police stops. Apparently there was a massive pilgrimage going on. The opposite side traffic from the airport was filled with bus after bus after bus as far as the eye could see.

Once at the airport we got our bags checked in and then headed across the street for some breakfast. I felt a little guilty checking in through first class (super cheap when I bought my ticket) and tried to see about getting her upgraded but they wouldn’t let me. For breakfast we had one last humita and scrambled eggs. This is also really the first time I actually got a chance/took the time to talk to Kristi for any length of time. She was quiet most of the trip otherwise. With plenty of time we got back to our gate for boarding. Again the guilt was there as I boarded into first class and she was in group 4. It was nice to have a seat that lays almost completely flat. I just couldn’t seem to fall asleep though. The breakfast was light. Eventually we landed in Miami, more progress made on another book. I got out and waited for her and then we headed to customs. Guilt again pops up as I wanted to flex my global entry for the first time. Had I just gone straight from the plane I would have been through and out in minutes, first because my seat was close to the door and second because global entry was so quick for getting me processed.

Once we were both through it was off pick up our luggage. I got one and Kirsti got hers. And then I waited for my carryon that I checked in. And waited. And waited. Eventually I told Kristi to just go since she had an earlier flight. As I walked around I noticed a stash of bags. The douche bags at MIA airport had been pulling off the bags and not telling anyone. I found my second bag and went over to the customs. Precheck came in handy and I once again came out ahead of Kristi. We had time since her flight was delayed so I took her up to the lounge (bonus from the first class ticket) for a quick bite. It was nice to have fast and reliable wifi again. Spoiled, but it did allow me to send messages and emails to people to let them know I was still on time and that my phone was a brick. At first I was praising my iPod touch until I remembered that I had a laptop too and could send messages that way as well. I also scheduled an appointment to try and get a new phone tomorrow.

Kristi took off at one point to get to her flight. As I was checking in on her status the delay just kept going. I’m not sure when/if it ever took off. I got caught up in writing, emailing and working on photos until I noticed that the boarding time on my flight app had trickled down to 0hr. Oops. My flight was boarding. I walked quickly down there and yippee for easy priority boarding and I slipped aboard. A first time splurge for the return trip was paying off all around. Too bad it couldn’t control the weather.

My flight took off about 20 minutes late due to lightning. I had a nice turmeric paneer meal with salad and bread while watching one movie and most of a second. The first was train wreck and honestly even as I type this I can’t remember what the second movie was. (Post: it was max, I remembered before my last flight landed.) I had about 30 minutes left which stinks since I was enjoying it. The end of the flight I ended up talking with my elderly neighbor across the aisle. She was with her husband returning from a cruise. It drifted into religion, love and politics. Three things I thought I wasn’t supposed to talk about.

I ended up at my next destination with my flight already boarding. People let me get off first and I ran only to find that I had to now take a shuttle. So be it, I’ll fight until the end. I hopped on the shuttle and the driver called someone to let them know I was on board. He said we’d be there in 2 min and they said the doors were closing in 1 min. My heart dropped a little. As we were pulling up he called and said I was in the building (I wasn’t). (Heart back up). I ran to the gate and the door was still open. I was asked if there were more passengers but I didn’t have a clue. So now I’m on board the flight heading home. It’s supposed to be cold but my biggest worry is if my bags even made it. I guess if I could make it across gates running and with a shuttle, someone with a vehicle that goes straight between planes might just make it, so no I don’t think they made it. I don’t think they want my stinky clothes that long. It smells like sea lions and until you smell a bunch of them together you can’t appreciate the stench. I expect this flight too will land just fine and if it doesn’t, then it won’t matter if I write anything else because the laptop will be in a bunch of pieces. So I’ll finish up here and just relax for a bit with some hot tea. It’s been a whirlwind 12 days and I’ve got a couple busy ones coming up before I go back to work. Fingers crossed I reach someone to pick me up and for my bags to arrive but if not there are always taxis and I can pick up my things tomorrow.