Beautiful morning. Of course lots of pictures. The breakfast was international buffet style. Wanted an omelet but it was runny even after asking to cook it longer. The weather is beautiful this morning. We are heading to the gardens. There is some kind of conference going on there.

View from the common balcony of Casa Verde. I never spent time on those lounges as there was never time. I also would never have gone in that water. Yuk!

Seriously, when was the last time, if ever, that you saw someone fishing like this?!

Walked through part of the gardens. Very very large gardens. More trees than small flowers. And lots and lots of gnats and mosquitos. They welcomed me with my open (sleeved) arms. On the bus we are headed to trinidad.

The gardens of Cienfuegos

If I remember right I believe this was an airplant. It is not parasitic.

Macadamia nut. Many nuts are inside this.

A nice looking classic car. There were lots everywhere.

The flag was explained. 3 blue stripes for the three areas divided. 2 white stripes for the purity of the cause. Red for the blood shed. The white star for independence. The three points of the triangle for liberty, equality, fraternity (Liberté, égalité, fraternité).

Long ride from Cienfuegos to Trindiad. Passing by the mediterranean was beautiful. I can see why people want to vacation here.

The weather is hot for a lot of people. 80% humidity but it doesn’t feel that hot to me. Maybe because I’ve had worse and I’m drinking water often. A lot of people are also in short sleeves and shorts/dresses. At the restaurant for lunch after walking around and buying a few things in the market. A drum, dominoes and two sets of earrings.

Local band playing on the street. They had CDs to sell. Every band everywhere on the island seems to have CDs or DVDs to sell.

Local made jewelry and other items.

good food for lunch. Tomato soup, vegetables and fruit. For drinks the El Dorado which had banana liquor and run with lemon juice. The 2nd drink was a dark beer. Lunch choice was vegetables, omelets and plantain chips and rice. Espresso and dessert to finish things off. Now we are headed to a pottery place.

Reminds me of the imu in Hawaii but above ground and without the cooking from the inside. You’ll either be grossed out or drooling over this picture.

Part of the whole band but this was his solo.

First time with a cigar and the always present cuban coffee. Didn’t have time to try it.

The potter was a nice man still making lots of pottery with young helpers. His hands were so fast on each piece it was incredible. I couldn’t help but buy a bunch of pottery. Getting it to Miami will be a trick with limited space. Hopefully someone will have space and I can store some of my things in their bag until Miami. Then I can check on bag in to fly home with and the pottery in my hand. I hope I don’t buy more. Where will I put everything. Wish I had brought a bigger bag.

The potter’s house. He may just be old enough to know the original.

Pieces you can buy. I bought two vases. Only one made it home intact.

The potter showing us his work. The man could spin out pieces fast. 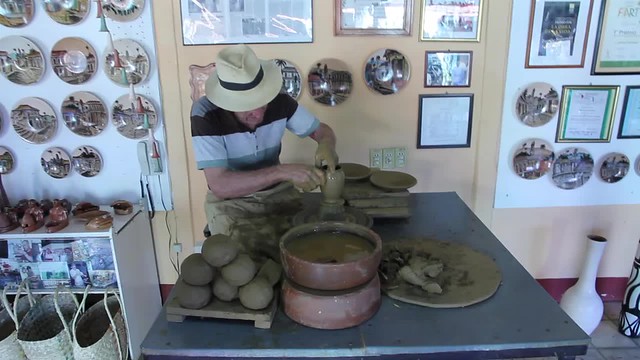 We started back to Cienfuegos and did a short walking tour of the city and plaza. Beautiful theater with a band practicing. I need to count my money (cuc) and see how much I need/need to exchange. I also need to think about the tip sheet for the end. I wish people/tours would just include it as an initial pot/kitty we we wouldn’t be surprised or have to think about it. They booking tour agency low balled the expenses and even after getting more from the bank I wonder if I’ll have enough. I also need to factor in/think about money as souvenirs if they are going to change the currency in a few months. I also have two Cuban cigars. 1. I’ve never smoked a cigar. 2. I can’t take them home. 3. I don’t have a way myself to cut and light them. I’m sure though I can find a way. A little down time then off to dinner.