Spent time after dinner putting pictures on the mini to look at. So many bad ones. Took the bus to dinner but we could have walked and some of us did so coming back. I also tried smoking a cigar on the way back. It went out before I finished. I don’t know much about smoking it seems. I also wasn’t coughing for long. The weather is great in the evening.

So far this morning I got some pictures in. Still tossing and turning during the night so what else to do but walk and take pictures as the sun is rising? Then clean up and head to breakfast before heading to Santa Clara to see an old person’s home and art (therapy) as well as the Ché museum.

Getting their morning catch on

Che on the side of a prefab housing building. His and other likenesses were everywhere.

The open market was busy but not as busy like in India. Prices were expensive for locals. Lots of colorful things. At the square then to see/hear some musicians.

That yummy goodness is fresh garlic

I think those are sweet potatoes

She wanted me to take their photo… so I did. Here it is.

Rice and beans.. a staple food

The holes in the building aren’t from nature. Those are bullet holes.

Put your shoe on, you’ll catch a cold. This is the Boy With the Unfortunate Boot and is a symbol of the city.

Kids in a cart being pulled by a donkey. How is this not cute? And that girlchild already has some attitude. Those boys better look out.

Great trio of musicians at a museum. They play Spanish Renaissance music. Unfortunately they didn’t bring their CDs for us to buy.

Fan used by women, perhaps with the secret language.

Handmade item in the baby’s room.

Lots on intricate detail. Beautiful piece. Maybe I should learn to play the violin. 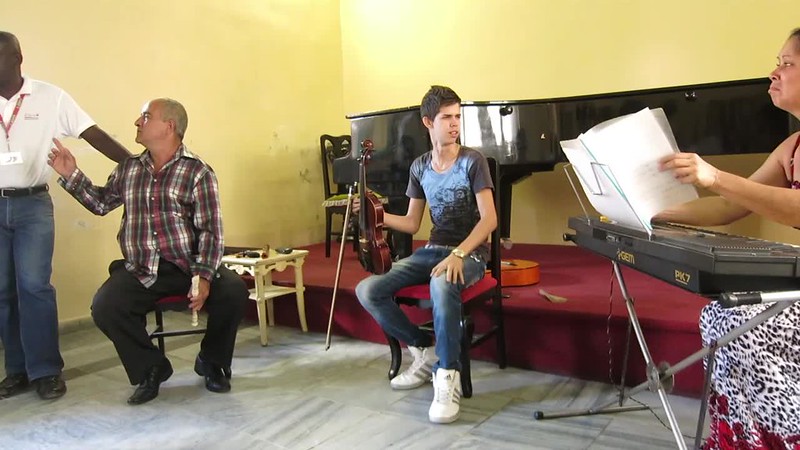 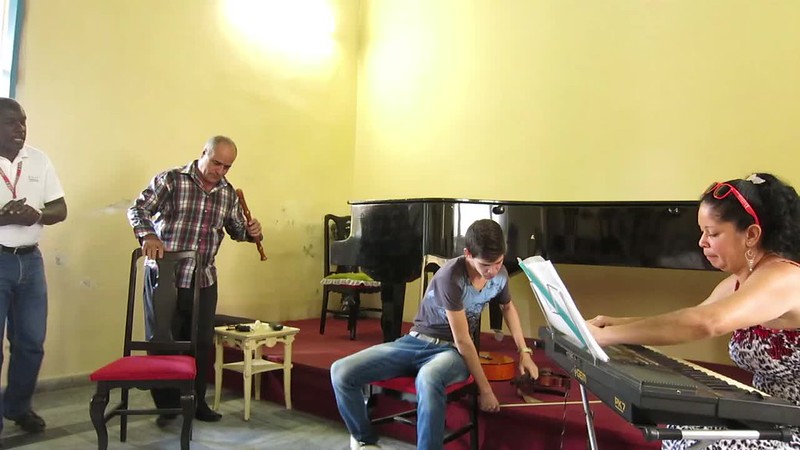 The young man, son of the woman, ran out after they were done and returned. I had gotten some videos while they were playing although I killed off a battery. When he returned I was able to buy a DVD from them. Now at a retirement home. Bought a wooden instrument and cigar cutter (although not sharp). Still need to find matches.

At the elder retirement club we danced and watched some Cuban games. We learned about the secret (not so much now) language of the fans that was used by young women for courting during dances to show favor or disfavor with a young man, including when to meet back after hours if she so desired. Most people seem to be having a good time today. Afterwards a short walk to lunch. Another good chicken dish. Lightly grilled breast. The rice always taste good and seems to bring out the flavor of the chicken. I’m feeling tired and the mosquito bites are acting up. I hate being itchy. The camera is showing under 999 pictures. It means I am on a countdown. Thankfully I have the extra cards but I’m not sure even that will be enough for the week. We shall see. I might have to start culling pictures as if they are my living children with limited resources.

Getting to the retirement home

They had more energy than a lot of us. Exuding cuban sensuality. Maybe those stories of what goes on in retirement homes is true.

Well the main camera is showing 999 again which makes me happy as I thought there were more pictures I could fit on the card. The Ché Guevara museum was well done even if it was small. The memorial is the burial all of those that went with Ché to Africa first but died with him in Bolivia. There was one woman that fought with him named Mimi. She is buried there as well. There is an eternal flame at the end. The next part had pictures from him and of him and collectibles from his life including his medical equipment and letters. He had a lot of charisma in his photos, smiling and happy and serious when needed. The area was created over two years and to honor Ché people weren’t paid to do it. It was in honor of Ché’s belief in sunday volunteerism. We stopped by the trains from Batista that got hit from Ché and his people. Now back to Cienfuegos, rest, then dinner.

The front of the Che Guevara museum

He believed in Sunday volunteerism

The site where Che and his men attacked and destroyed a train of Batista’s carrying supplies. They attacked from on top of a hill and then overran it.

American bulldozer that I presume was used in some fashion or had something to do with that event.

The rest really didn’t happen. Showered and shaved. Cleaned up and sorted through my bags. Couldn’t find my cucs at first but found them at the last minute. I thought I was running late to make it by 620pm to meet up but physically ran in the end to make it. We were told the symphony would start at 630pm. I hope people have a good excuse for being late since it’s already past 630pm and people are still pending. The bad part of me wants to leave them behind since it’s rude to be late with all the time we had to be on time.

This was a private audience for us. 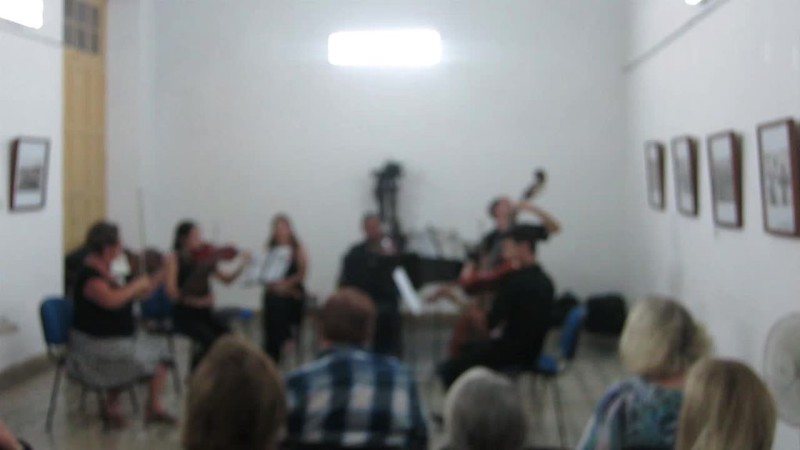 This symphony production is just for us! I thought it was for others as well. It’s nice to hear the symphony here. ‘People’ back home might have a bad impression that Cuba is so backwards and locked in that they can’t have ‘culture,’. This classical symphony reminds me of the symphony at home and puts me into a mentality that along with the inspirational feel of the music, that hope and ‘positive’ changes are possible and forthcoming. I’m writing and listening at the same time. The main thing to pull my attention is a sour note at times. The piece just played was Bella Cubana but I might be writing it down wrong. They are also playing a Danson song which is the style of music we heard earlier today and they say is the precursor to many other styles of dance such as tango, chacha, salsa, etc. The recordings I did were not for posterity only, but as examples to show others that the shell of Cuba is not necessarily holding something rotten inside but some things are sweet and delicious and may just be worth the time and effort needed to work on opening the shell even if only mentally. Sure some things may be bad or rotten but truly, what people or society at this time is enlightened. Every culture, possibly every person has that inside which they wish to hide and suppress. It doesn’t mean struggle isn’t worth it. The struggle can help to define us as a people and I mean globally. I still fear man is his own greatest enemy and we must survive before we can endure.