The dinner went smooth even if I got soaked through in the rain getting to the restaurant. My choice. I could have waited for an umbrella. The tenderloin wasn’t bad, just not flavorful. They asked for feedback at the restaurant so I told them that I wasn’t impressed by the majority of the meal. Lisa, a member in our group, is also a singer and sang a song with the band. It’s on video as soon as I realized what was happening. After dinner we had drinks at the bar in the hotel then I finished some packing and went to bed.

Regular breakfast and bus loading. We passed through town to get to the airport. It was pretty quick to go through immigration. Some people were denied their Cuban stamps in their passports. I found someone that then talked to a supervisor that said they would get someone out to stamp them. I think we were stonewalled but Daniel stepped in and with far better and smoother spanish than mine was able to keep the ball rolling. The woman from immigration, the person that was the same official for all the people that didn’t get their stamps, eventually came out. She said that they all said they didn’t want the stamp. Oh well. They got their stamps in the end which is what matters. Boarding is starting and we will soon be off. 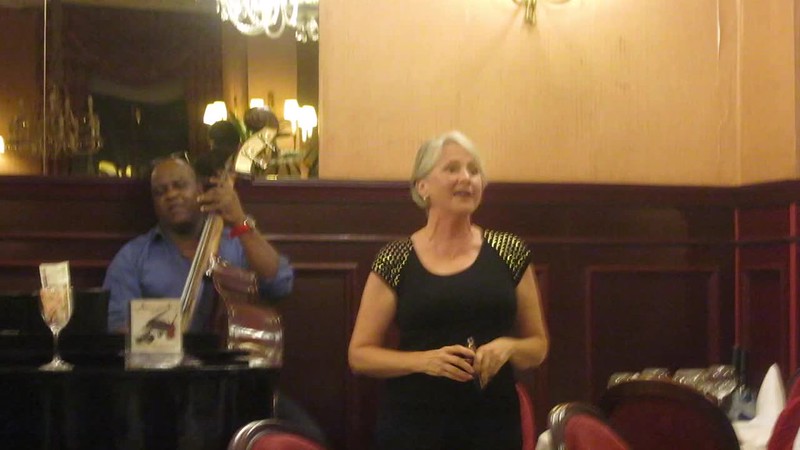 Coming to the airport

The airplane. One more step to leaving.

Looking back at the airport

People getting their last pictures in

A land that looks almost like any other. Are we that different?

The mental processing of this trip is still continuing. Good people were on this trip. Just about as diverse as I could have anticipated. It was nice to hear from those that have done these trips more often that the people were overall good, including us menfolk who were mostly inclusive and communicative. Plans are already in the works for a february meetup for more fun but not an organized tour. Just good people wanting to hangout together.

Watching the news on the way through the airport is about immigration. At this point I don’t know the details about what is going on but it is interesting that while I was traveling this was something that was coming up almost hourly but in a much narrower focus of the US-Cuban relationship. The issues to me don’t seem that simple and I keep thinking of complexities in working through the relationship. Perhaps I’m making it more complex and it really is as simple as just lifting the embargo and letting the world market and political machine sort out the details. Cuba will sink or swim just like most other countries in the world. There is a bit of catching up to do in technology but I don’t see any huge problem as businesses around the world might jump at the chance to have a first foothold in an emerging market even at a significant monetary loss in Cuba. A business with enough global capital could take the initial hit with a longterm possible improvement.

I can’t help but feel moved by this experience. It’s not anything new. A poor or third world country with people who may or may not feel repressed, depending on who’s point of view you are coming from. Which is better is hard to say honestly, more freedom and opportunties at the expense of security and perhaps common compassion, or living somewhere with very little unemployment, albeit seemingly boring or unworthiness as well as a low reported crime rate, an incredibly high literacy rate along with food rationing and reports that professionals quit their jobs as doctors, nurses, lawyers to work as porters at the hotel or prostitutes because it pays better. That I brought small soaps, shampoos, etc because they can be too expensive for locals to buy is still staggering for my mind to wrap around even if they are luxury items. What will be the impact of a single currency? What will the next phase be when Fidel dies and then Raul? Will North Korea with current events see Cuba as a stepping stone as the soviet union once did? Are we headed to a second Cuban missle crisis but with a country that seems from the media at least that they might even be willing to pull the trigger. Today could soon be the last one.

Flying out I could see the country passing under me. It felt like other places I’ve been. Indian with the wooden objects, carvings and marble. People with a strong belief in education. Lush plants of a carribean country, 3rd world but a political entity that overshadows things.

People talk about feeling like you are in a time and place for a reason. For the first time in my life I feel it. The current future is more bleak and dismal than I could imagine as I fear man may just eliminate himself before he can grow up. I can’t envision a world 5 years from now because things shift so quickly globally.

The thoughts will continue. The questions will stay unanswered until they become a part of history and I hopefully will have lived through them. I’m excited for tomorrow, a contradiction to the idea of a bleak and dismal world. Perhaps it’s that continual naive desire for a better today as tomorrow is too far away.

At home after unpacking, one of the vases didn’t make it even when wrapped in clothes, placed in a wicker style basket stuffed with clothes then placed in a checkin bag. It was not meant to survive the trip.

Ever since I returned from Cuba, something has been gnawing away at me. Today 11/26 it hit me. I don’t understand money. At the most superficial level I get it. I work, I get an electronic deposit which I can exchange for printed linen objects and I exchange those for different types of other objects or service. A very elaborate barter system. But when I think about it, I don’t get it. And then it gets more confusing thinking about debt, about value in other countries and it keeps going on. My mind keeps tripping over itself when I start working thoughts around the idea of money. It feels like a global game that is one step away from running away and collapsing from the exertion needed to keep it going.

People go to jobs, some physical on farms or cleaning. Others more seat based like data entry and stuff. We produce things, again some physical like fruits and vegetables and others like spreadsheets and databases. But what are things actually worth?

I’m trying to imagine a dollar or hundred or whatever. Company X wants to create and sell something. Research is done. A product is made with bought goods. Let’s say the cost is $100 for numbers sake. Now I have about zero understanding of business taxes and whatnot. Someone else can correct me. This big company sells this product to Company A. Company X has probably paid taxes on those parts and research to make the $100 product. Now Company A is paying tax on that product. 5%? I have no idea. This comes to $5. Say X spent $5 in taxes also even though it was probably more. Now it’s $10 to the government. There will be marketing and so forth. Company A is a distributor that then sells to Company L. Again a cut is taken from that sale. Business P is the final company and they pay their tax. The consumer walks into the business and now buys it with another tax. 5% each at the magic $100 mark is $25. 25% to the government for the consumer to eventually buy this product. That’s not including all the other expenses that went into getting it made, marketed, shipped, etc. There’s also the lost income tax of the consumer to even get that $100 to spend. I hope I’m not understanding how this process works. Like I said, my mind keeps tripping over itself trying to understand this. How are we in so much debt as a nation when it seems like so little of the money I make is actually making it to me. I can’t begin to fathom the lifetime saved in a state without sales tax or income tax. It would be crazy in a state without both.

What does this mean in relation to Cuba? If and when things improve, how will this all change and impact the economics in our country and in Cuba? The potential ripples across the globe will be interesting to watch in my lifetime.

Too much pondering. My brain hurts now.