As an amazon prime member I had the opportunity to buy an Amazon Echo early and for a discounted price. It seemed like a good idea of exploration. There are houses out there that have an incredible level of home automation but this is something not too expensive and definitely first generation. It’s a glimpse of a future not that far ahead.

This is the basic box that it came in. Nondescript. 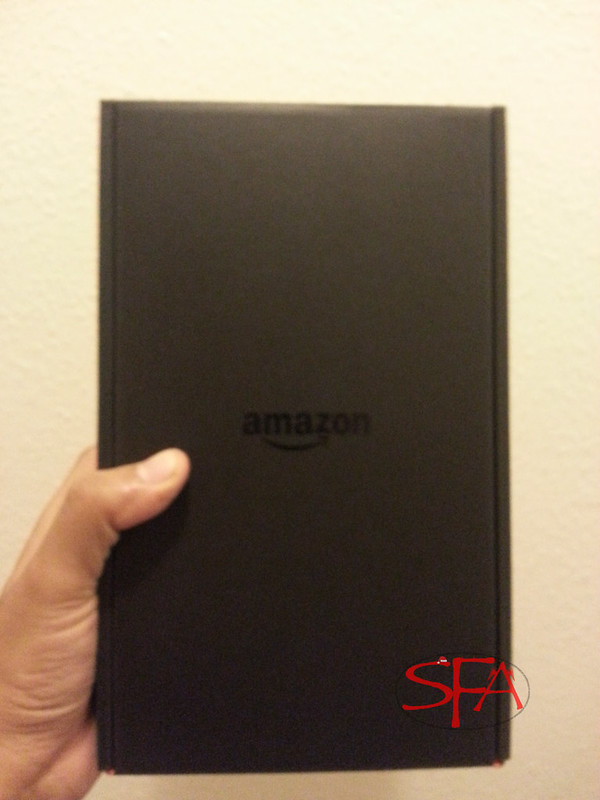 There was a small riptag and then the box opened up easily. At first glance it looked small and I had my first doubt about what I purchased. 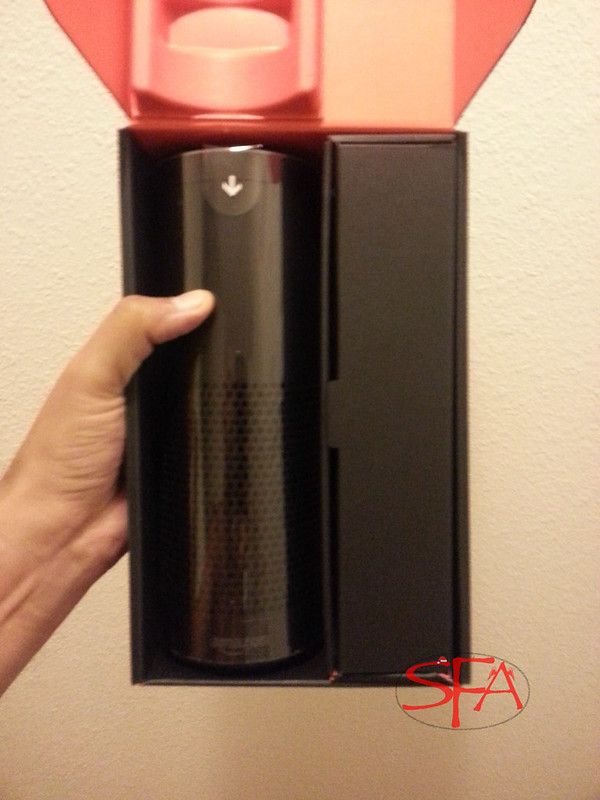 Accessories on the side. Basic remote with voice capabilities as well as the batteries and the power adapter for the echo. 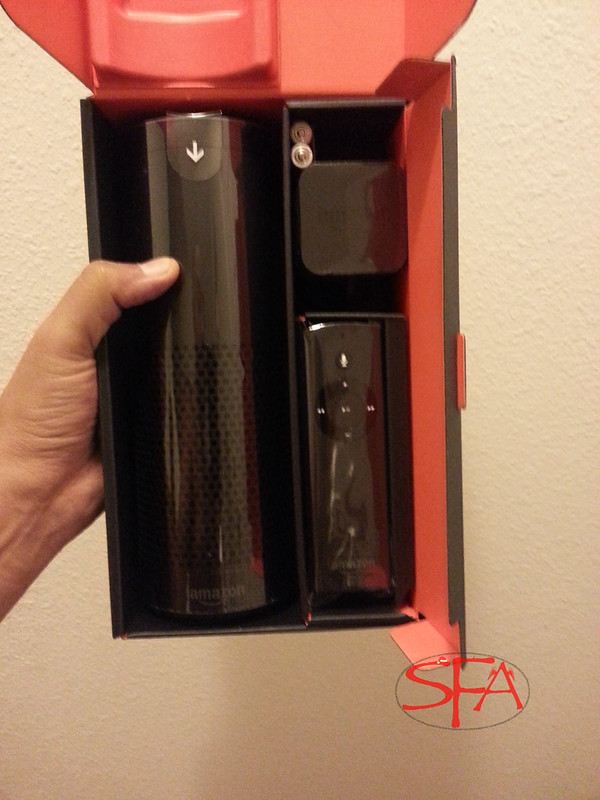 Once you take out the echo, the instructions are right below. Very simple and easy to follow. Put in the power cord and plug it in. Download the app to get it hooked up to the web. Since I bought it from my account, it came linked to my prime account. 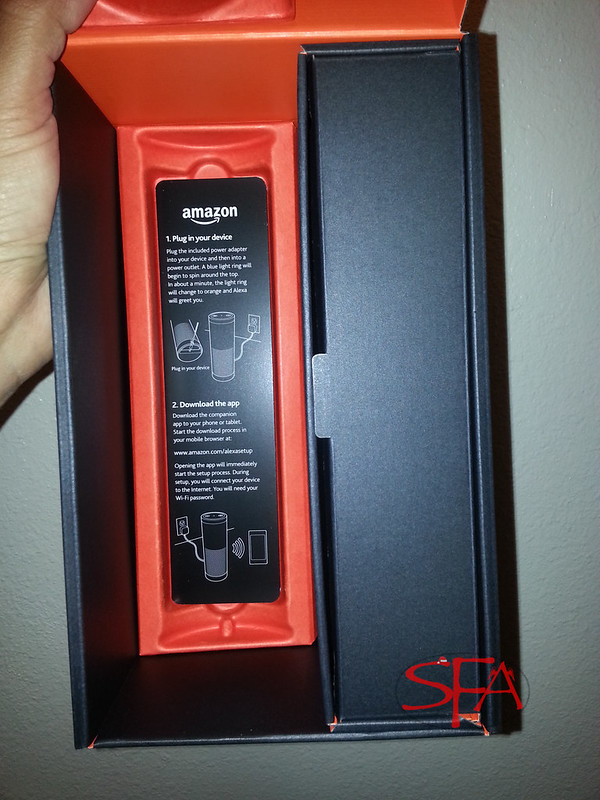 This is the base with the amazon power cord. I wish it actually sat flush with the base. I would feel more confident a little wiggle wouldn’t cause any problems. As it is, it’s not really being moved about so it probably won’t be yanked on very much. 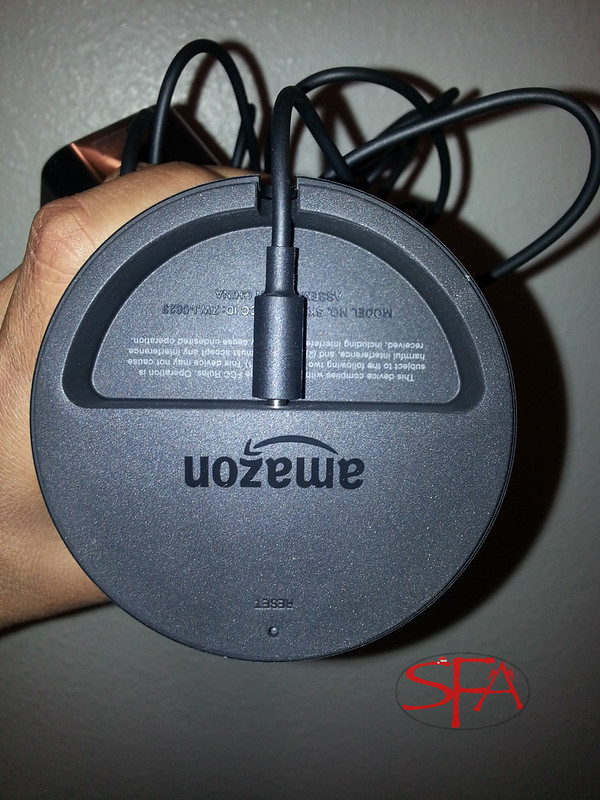 Overall it’s a small device and gets lost on my bookshelf easily which isn’t a bad thing. I want to use it but not always know that it’s around. 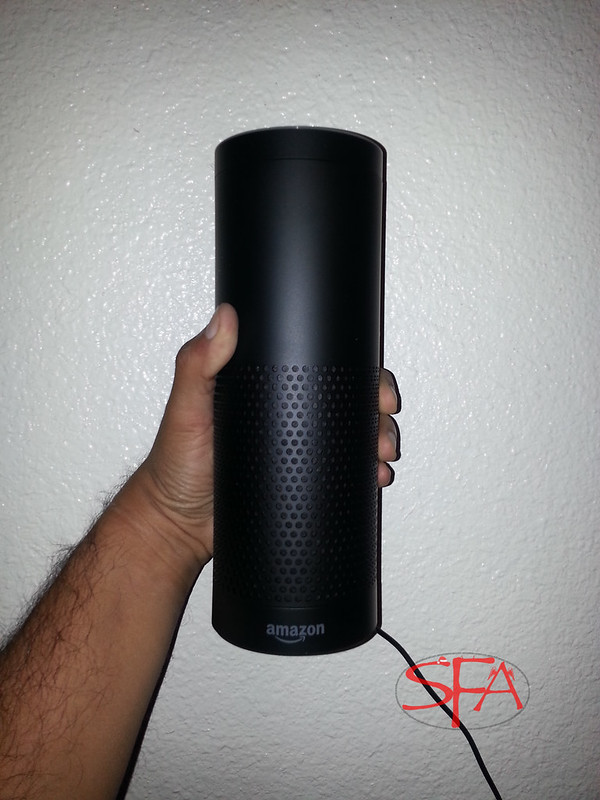 The original video was right side up. I can’t get it back but here it is anywhere. Basically the remote can attach to a magnetic base you can place on the wall or with tape if there isn’t something magnetic around. I hadn’t setup everything the first time I tried to attach the remove to the base. Lesson learned. The magnet of the base is attracted to the batteries in the remove. That’s how it attaches. I couldn’t get it to ‘stick’ until I put the batteries. I assumed at first that it was already broken. Good thing I figured it out quickly. 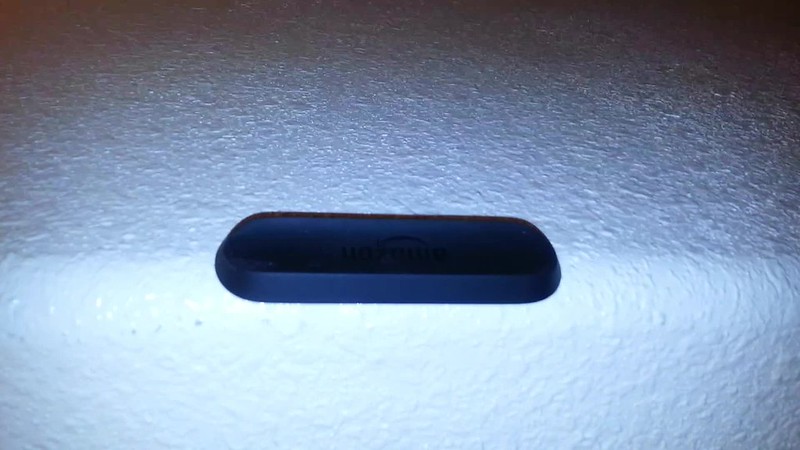 Now that the pictures and small talk are done, time to get to functionality.

I like it. It’s simple to use and give the information it can when asked. I changed from the activation keyword “Alexa” to “Amazon”. No reason to start into habits of thinking this is a person. It’s not. I can ask it to play music from amazon music or other services if I have them set up. I can ask questions about the weather at home or elsewhere. I can ask today’s weather or the forecast. Important and nice pieces of information. I can also ask it about the news and get verbal short on topics that I have prechosen as what I want to know about like USA news, world, sports, science, health, etc. If I want to move on I can just say “Amazon next” and it moves on. I can ask it to increase or decrease the volume or go to a specific setting. Nice when the phone rings. Most of the time it can figure out what I’m saying even with the tv on. It’s supposed to have multiple microphones to locate what I’m saying. There is a colored ring on top that will light up when the device is activated. When I speak to it I see a part of the ring light up in the direction of where I was speaking from.

Now basic things like weather and news are no problem. It’s when you really start getting into the questions that there is more trouble. I’ve asked it who won the superbowl in a specific year and it didn’t know. It shunts that info to the app as a search you can run.

It’s a nice device even if limited in its current abilities. I see a lot of potential and this is a great first device that might just lead the way.

My ideas for amazon on this.

1. Make a more powerful hub and use these as the satellites around the house. Satellites could be wall mounted as well since they don’t have to be as powerful.

2. Extra info from learning. If you ask each morning around 8 for the news, it can gather it early so it has it ready to give.

3. Specific activation keyword for each person

4. Lock out some people so it can’t get hijacked by voice recognition and/or have voice priority

5. Integration into a truer home automation with that more powerful hub and satellites. With the amazon fire tv you can have it voice change the program without needing the remote. If amazon partnered or released an API for this device you could link it to a Nest for starters. If you have a smart fridge which keeps up on the products inside you can tell the hub what you want to make and the ingredients and it can add on a grocery list the items you don’t have. The Nest already has wifi integration but the smart fridge is a ways to go. We still need a better system for this. If I could push something through it would be a system printing those qcodes on the receipt that you could scan in when you get home. It wouldn’t then just keep track of the fridge groceries but everything you buy. In the future it could link to your smartphone/id which would then just auto populate the info at home.

6. Keep the cost at 99$ as it is as the discount price. Less if/when as a satellite. I wouldn’t spend the 199$ for one that’s currently listed as the price but I would consider two at 99$ each. I use it often enough that I wish I had a second one already.

7. Small eink screen like in the paperwhite for time and weather. It’s on during the day and sleeps at night.

As a first gen gadget it’s not bad. There is so much wonderful potential it makes me excited for what might be around the corner from amazon and from all the other companies that are going to see the possibilities. Perhaps in my lifetime the home automation tool will be a reality.